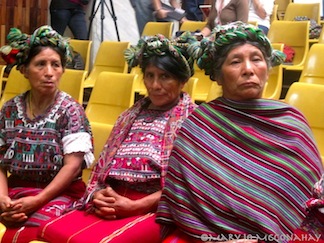 Our Stake in Guatemala’s Genocide Trial

With Syria’s strife, the NRA’s annual meeting, and Kim Kardashian’s prenatal woes to report, Central America doesn’t exactly dominate U.S. headlines these days. So we understand that the octogenarian former dictator standing trial in Guatemala for unspeakable acts of horror committed three decades ago may not have come to your attention.

Yes, with all that carnage from the 9/11 terrorist attacks, the Global War on Terror, Newtown, and the Boston Marathon, it’s hard to focus on a former Central American dictator’s bloody regime that killed thousands of indigenous people over the course of just 17 months in the early 1980s.

Yet you should care about the conviction of General José Efraín Ríos Montt for genocide — because U.S. foreign policy was on trial too.

Why? Most importantly, Ríos Montt was a graduate of the School of the Americas, a U.S. Army training academy for Latin American military personnel. And the U.S. government went out of its way in those early years of Ronald Reagan’s presidency to arm this butcher — under whose command soldiers slaughtered babies and the elderly alike.

Plus, the trial got way more interesting when it turned out that Guatemala’s current president, Otto Pérez Molina, was implicated in those 1980s massacres.

This isn’t just a question of setting the record straight. There aren’t many dictatorships to prop up around the region any more but the U.S. government is still making its neglect of Latin American democracy clear by refusing to disclose who attends the genocidal general’s alma mater. That policy began in 2004 during the Bush administration and has remained intact until now at the institution that the military rebranded years ago with an unmemorable name: the Western Hemisphere Institute for Security Cooperation.

The Obama administration may finally have to fix this disclosure problem. In late April, a federal judge in California ruled that there’s no legal basis for the Pentagon’s refusal to name the Latin Americans who participate in this program.

And while the U.S. military may not be as busy as it was at the height of the Cold War teaching Latin American military leaders to torture their own people, it does still maintain 22 bases in the region. We’d have one more if Ecuador hadn’t thrown us out.

In these belt-tightening times, Latin America offers Uncle Sam great opportunities to make some smart budget cuts. Thanks to the militarization of our failed War on Drugs, Washington has funneled $20 billion into its Latin American military operations over the past decade, the Associated Press found. Our yearly sales of guns, tear gas, radar equipment, and satellites to the region have quadrupled to nearly $3 billion.

In Honduras, horrific human rights violations are current events — rather than the subject of a long-overdue trial. In the bloody aftermath of its 2009 coup, which Washington tacitly approved, all the Obama administration has done is vastly increase military support for that country’s anti-democratic leaders.

At least 25 Honduran journalists have perished since that coup and death squads are on the rise there. Will Hondurans have to wait three decades until those responsible are finally held accountable as we’re seeing today in Guatemala? And which ruthless Latin American regimes will Washington be arming at that point?

Emily Schwartz Greco, the managing editor of OtherWords, covered Latin American finance and U.S. foreign policy toward the region for the Dow Jones and Bloomberg news services. Columnist William A. Collins is a former state representative and a former mayor of Norwalk, Connecticut. otherwords.org