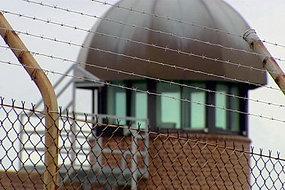 Mere facts and logic can't compete for influence with the money and clout of the Prison-Industrial complex.
By William A. Collins | July 2, 2012

Prisons now
All out of scale,
Keeping extra
Guys in jail.

You can tell there’s good money in prisons these days — Wells Fargo is investing in them. And why not? Since America incarcerates more of its citizens per capita than any other country, jails look like a safe bet.

The timing seems just right too, since more and more states are turning their penitentiaries over to private companies. That often saves money because it bypasses pesky unions and nosy reformers. And just to be on the cautious side, new management contracts demand that states keep their inmate level up.

As usual, there are ominous wrinkles. Florida’s legislature narrowly defeated a scary bill earlier this year that would have privatized 27 prisons. In Louisiana, the rapid growth of private prisons is making an already inhumane situation far worse.

Consider this: Our incarceration rate is nine times higher than Germany’s.

With prisons costing us an arm and a leg and America’s crime rate plunging, there’s no justifying the imprisonment of more and more of our fellow citizens. But mere facts and logic can’t compete for influence with the money and clout of the Prison-Industrial complex.

In addition to big corporations and banks, the complex includes unions, host communities, suppliers, police, sheriffs, and ideologues. These groups hold sway in many elections, and after all, inmates can’t vote.

Maybe they should. Then they could press for services that are now provided only stingily — services that might help them break the recidivism cycle. These needs include, above all, mental health care and education. Today, there are more mentally ill people in jail than in treatment.

Sure, plenty of non-violent offenders amply deserve to be behind bars — think Bernie Madoff. And lots more from Wall Street ought to go.

Meanwhile, our shortsighted “three strikes and you’re out” and “life without parole” laws are quickly turning many prisons into nursing homes for minor offenders.

If societies can indeed be measured by their prisons, we flunk. We jail far too many while squandering untold billions of bucks.