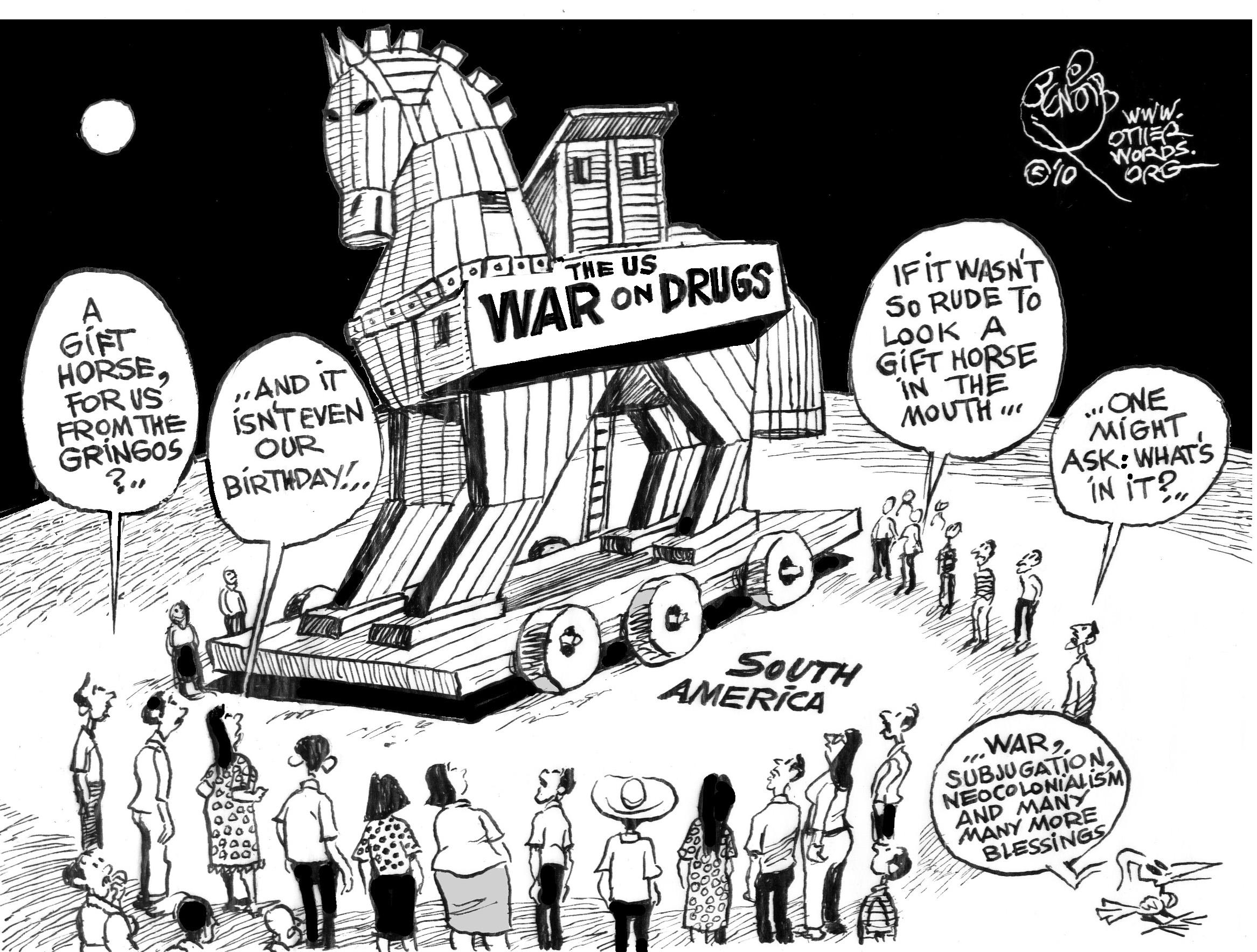 Still in charge,
With naught to fear;
We control
Our hemisphere.

James Monroe was our first president to formalize U.S. intentions toward Latin America. Two centuries ago, he told the European powers to stay out of our yard. The Monroe Doctrine was pretty cheeky stuff at the time, since aside from Haiti and our nation, every land in this hemisphere was still a European colony. 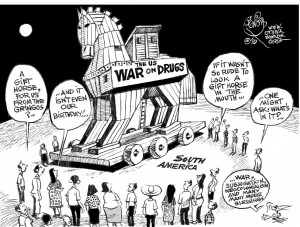 Today several small Caribbean islands remain under European control, but France has the only remaining mainland possession. (Consult an atlas and you’ll find French Guiana, which is smaller than Indiana and has fewer than 200,000 inhabitants, on South America’s northern edge). We’ve also got our own Caribbean colonies (Puerto Rico and the U.S. Virgin Islands) but most of our economic and political control throughout the Americas is more indirect and of the neocolonial variety.

Exerting neocolonial power isn’t easy. The politics often turn brutal, and torture was long a favorite technique of America’s dictator friends to keep themselves in power. Fashions change however, and now murder is the enforcement vehicle of choice. It’s especially aimed at labor leaders and journalists.

Other fashions change as well. Thus, colonialism no longer generates the admiration and envy it once did. Keeping our Latin American neighbors seemingly independent, but still supportive of U.S. corporations, now requires new methods. Foremost of these is the “Drug War.” This sacred crusade justifies the commission of almost any predatory act.

The prolonged intrusion of U.S. troops and mercenaries into Colombia, ostensibly to fight drugs, may be more about restraining the restive and often left-leaning folks in the countryside. Now the friendly Colombian government is also allowing us the use of seven military bases from which to menace Venezuela and Ecuador, two prominent defectors from our old colonial team.

The United States is even bringing warships and troops to Costa Rica, which hasn’t had an army for more than six decades. The USS Iwo Jima landed in the Central American nation’s Caribbean port city of Limón a few months back on a “humanitarian mission.” It was the first of up to 46 U.S. war ships that may dock in Costa Rica by the end of 2010. That sure seems strange in a country with no army or known enemies. The excuse? The Drug War, of course.

The National Endowment for Democracy serves as another effective colonial tool. Through it we funnel major sums from our budget into southern nations to strengthen local institutions. In those lands with right-leaning governments it flows to their supporters; in those tilting to the left it goes to opponents. The biggest pile of cash nurtures the Venezuelan opposition press in its continuing subsidized efforts to finally get rid of Hugo Chávez.

“Free Trade” is still another useful control mechanism. It often nourishes North American mining corporations and agribusiness. Consider the situation in El Salvador, where Canada-based Pacific Rim Mining Corp. had applied for permits to start up giant cyanide-leach gold mines, and U.S.-based Commerce Group was already running environmentally destructive mining operations. The Salvadoran government has refused new permits (an impressive sign of independence) because cyanide does…well, you know…whatever cyanide does. And it voided the Commerce Group’s permits too.

But, surprise, there’s a higher authority than just the government. It’s an obscure international tribunal based in Washington. Under the rules of the Dominican Republic-Central America Free Trade Agreement (DR-CAFTA), El Salvador may have to pay Pacific Rim and the Commerce Group hundreds of millions of dollars to compensate for its arbitrary restraint of trade if it continues to hold out for environmental protection. The tribunal, which is part of the World Bank Group, issued a preliminary ruling in Pacific Rim’s favor a few months ago.

Still, overall, Latin America’s leadership has moved leftward. Even the Obama administration’s tacit support for the military coup in Honduras and our government’s apparent indifference to the subsequent ongoing brutality hasn’t changed that.

OtherWords columnist William A. Collins is a former state representative and a former mayor of Norwalk, Connecticut. www.otherwords.org