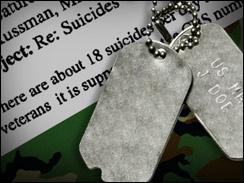 Our Troops as Cannon Fodder

Wars of conquest are most popular if they can be made to appear tidy, safe, just, and relatively cost-free.
By William A. Collins | July 9, 2012

Honor soldiers
For their fight;
Ugly truths
Keep out of sight.

Officials and partisans who promoted the wars in Iraq and Afghanistan early on favored “Support Our Troops!” as a rallying cry. The Pentagon propaganda machine even produced cute yellow magnets for our cars as Congress voted again and again to sustain those wars, all on our national credit card.

Meanwhile, the government did precious little to support the troops themselves. Basic personal and vehicle armor had to be arm-wrestled into the military budget.

But getting funding to prevent combat injury and death is a breeze compared to finding the money to repair injured brains or head off suicides. First of all, there must be an official admission that these problems exist at all. That’s painful for the government. Wars of conquest are most popular if they can be made to appear tidy, safe, just, and relatively cost-free.

Thus, it behooves commanders investigating non-combat deaths to dally as long as they can before begrudgingly classifying them as suicides. It’s also important to prop up every mentally injured soldier with drugs and to send him back to the front, rather than agreeing that he’s “wounded” and needs to be sent home for psychological treatment. Such injury statistics are intentionally made obscure.

So is the number of vets who get discharged for suffering “mental disorders.” This diagnosis means the government doesn’t consider them “wounded” and doesn’t have to treat them. They are then free to do battle with the Department of Veterans Affairs over the nature of their disability and their place on that infamous waiting list for treatment.

For many veterans, this kind of combat is just as grueling as fighting insurgents. Although the care itself is generally agreed to be fine, the ordeal to obtain it is often Kafkaesque. While the military can always find the money for new weapons programs, money for treatment is somehow always short. Destroyer budgets go on the credit card. Psychiatric care budgets must compete hand-to-hand.

Around 6,500 veterans commit suicide each year, driven by demons the rest of us prefer not to know about. Nightmares, sorrow, shame, and guilt can be self-reinforcing, especially when there is no one at home to share them. Plus, the effects are long-lasting. More Vietnam vets have now committed suicide than died in combat.

Female soldiers who become victims of sexual violence have it especially hard. The military tries to play down the number of rapes. Victims are often ignored, perpetrators are not prosecuted, and women who press their cases can find themselves diagnosed with a mental illness and discharged. And if the Department of Veterans Affairs is normally short of psychiatrists, you can imagine how fully staffed its OB-GYN departments are. Female deaths on duty are often attributed to ambiguous causes. Assault isn’t an acceptable category.

Meanwhile the war machine must keep filling its maw with new unsuspecting soldiers, using slick videos and shaky promises. Maybe all new recruits should have to sign their papers in a veterans’ hospital.