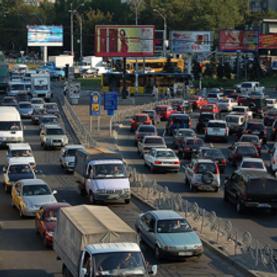 Paving the Way to 60 Miles per Gallon

The Obama administration's new fuel efficiency standards will reduce our addiction to oil, curb carbon pollution, create jobs, and save consumers money at the pump.
By Ann Mesnikoff | August 22, 2011

Americans use a lot of oil every day: nearly 20 million barrels — or, if you prefer, 840 million gallons. About 9 million of these barrels go toward feeding our cars and trucks every day. What’s more, paying for all of this oil drains as much as $1 billion from our economy to foreign oil producers.

This summer, President Barack Obama took a welcome step toward solving this oil problem, announcing plans to strengthen fuel efficiency and carbon pollution standards for new cars and light trucks to 54.5 miles per gallon (mpg) by 2025. A diverse group that included automakers, autoworker unions, government officials, and environmentalists celebrated with Obama when he made the announcement.

After more than two decades of stalling and inaction in Washington, Obama has, in less than three years as president, ensured 15 years of momentum that will double the fuel efficiency of new cars and light trucks, significantly reducing tailpipe carbon pollution.

These vehicle efficiency standards will reduce our addiction to oil, curb carbon pollution, create jobs, and save consumers money at the pump.

It’s about time. Americans sent Obama nearly 300,000 messages in support of strong standards. He heard from people from all walks of life who wanted to end our dangerous addiction to oil by making our cars and light trucks as efficient as possible. He heard from mothers worried about their children’s future, and from veterans concerned about putting more of our troops in harm’s way.

While this step from the Obama administration ensures that today’s technology is put to work to cut consumption, the standards being proposed are only a part of the equation for moving our nation beyond oil. Even if we start buying cleaner vehicles, Americans are still driving nearly 3 trillion miles every year. We must invest in smart transportation choices for all Americans, such as public transit and paths for biking and walking, as well as better-designed, less-sprawling communities that will help us cut demand for oil.

We want better, and we know that American technology and innovation can get us there. U.S. automakers have the technology today to get to at least 60 mpg by 2025. They must be challenged not just to meet but to exceed the standards.

While the administration didn’t cave into the auto industry’s “can’t-do” message, the industry did secure loopholes and provisions that must be fixed over the next year. A 54.5 mpg standard will save consumers money at the gas pump and cut our need for foreign oil. But to deliver, the final rule must be strong.

There are still important details that need to be finalized to ensure the overall success of this program. The Sierra Club will continue to work with the administration to ensure that the standards remain strong and that industry giveaways and loopholes do not undermine the long-term benefits of better fuel-efficiency and pollution standards.

Consumers can help by making fuel efficiency a priority when they buy a new car. Further, we can all help by driving less and advocating for a transportation system that makes it safe and easy for us to get around without getting in a car.

Americans from across the country weighed in heavily before Obama’s announcement was made. Now we’ll need an even louder chorus to ensure that the final standards are as strong as they can be and that we get the transportation choices we need. One step alone won’t solve our oil problem.