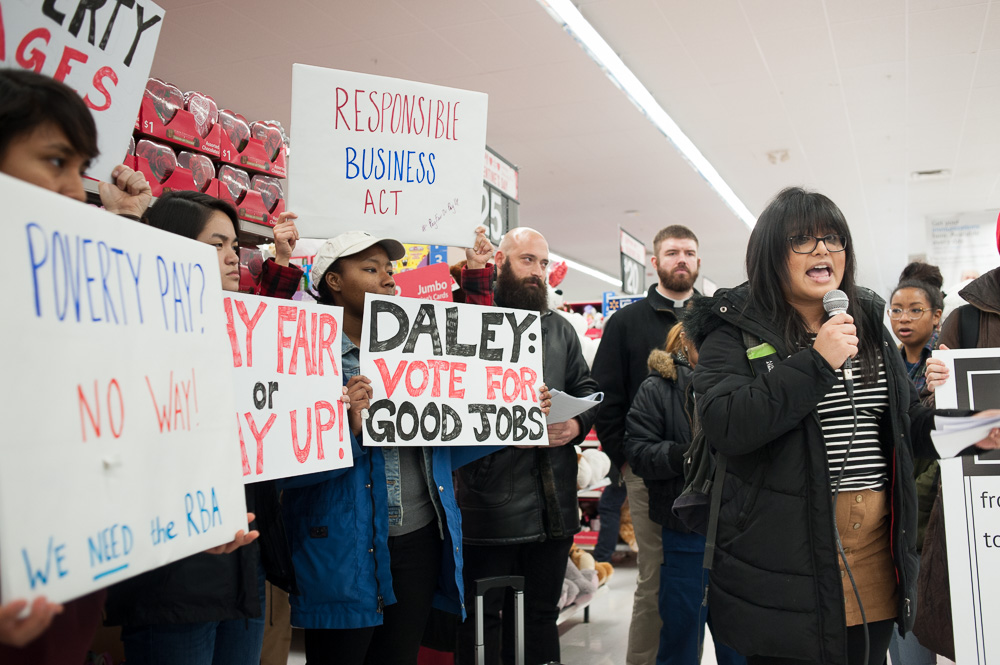 Economic justice activists are championing laws that shift the costs of toxic poverty wages from communities to corporations.
By Liz Ryan Murray | March 2, 2016

Imagine if a corporation set up shop in your community and immediately dumped toxic sludge in your local waterways and buried radioactive waste next to your biggest playground. You and your neighbors, I bet, would demand full compensation from that corporation to pay for the clean-up and public health costs.

You’d have a strong case.

What about corporations that pollute communities not with chemicals, but with poverty wages? The impact can be every bit as toxic, and yet companies that pay low wages get off scot-free. In fact, their CEOs usually get bonuses.

Economic justice activists across the country are fighting back against this outrage. They’re demanding that corporate polluters pay a price for low wages.

In the Chicago area, for instance, Cook County commissioners are considering a bill that would slap fees on corporations employing more than 750 workers at less than the local living wage — currently $14.57 per hour, or $11.66 with health benefits. 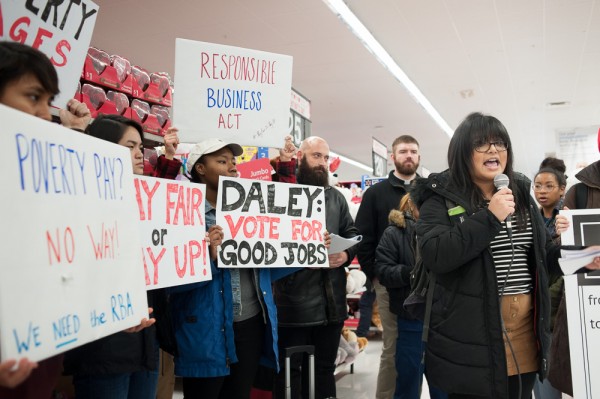 Under this proposed Responsible Business Act, companies would pay the local government $750 per employee each year for every dollar their wages fall below the living wage. The bill would generate an estimated $580 million in the first four years.

Community stakeholders would get a voice in deciding how to spend this revenue to help low-income residents. For example, some of that money might boost health care options, pre-trial services, and housing assistance.

Why not just raise the minimum wage? In an ideal world, it would be the best solution. That’s why “Fight for $15“ campaigns are catching on. Unfortunately, the vast majority of Americans still live in places where wages won’t lift working families out of poverty anytime soon.

Low-wage employer fees provide a good alternative by targeting the large corporations that can afford to pay their workers more, but are choosing to drive low-wage pollution instead. This approach encourages these companies to raise wages while leveling the playing field for the businesses that are already taking the high road.

As long as poverty wages persist, we’ll all pay the price.

Low-income people, especially in communities of color, also face a far greater risk of being arrested and jailed for minor offenses, leaving them with even higher barriers to future economic opportunities.

To keep their families healthy and safe, low-wage workers have little choice but to turn to public assistance programs. Reforms like Cook County’s Responsible Business Act could help us recoup some of these costs.

Large corporations are “socializing labor costs,” sums up Will Tanzman of IIRON, the Illinois-based economic and social justice organization that’s part of a growing movement for the Responsible Business Act. One local poll, he points out, shows county residents favoring the bill by a 2-1 margin.

Connecticut activists pushed a similar bill last year. A new law in that state mandates the creation of an advisory board where workers will join employers, public assistance recipients, elected officials, and other stakeholders to develop recommendations for how the governor and state legislators can address the public cost of low-wage work.

Activists and elected officials elsewhere, including Colorado and New York, are also exploring the possibility of applying low-wage employer fees.

These campaigns aren’t about demonizing public assistance. In the richest country in the world, we should have a safety net strong enough to ensure that all our most vulnerable people live in dignity. That ought to be a matter of national pride.

But a system that lets overpaid CEOs underpay workers and then get taxpayers to foot the bill for the damage that results? None of us can take any pride in that.