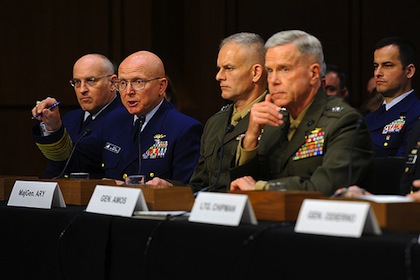 A commander with a record of intimidating whistleblowers shouldn't have led the fight to reduce sexual assault of our women and men in uniform.
By Avery Kleinman | December 18, 2013

It would be great if we could take military leaders at their word when they vow to stem the growing tide of sexual assaults in the armed services.

Secretary of Defense Chuck Hagel announced new measures over the summer to address what he described as “a stain on the honor of our men and women who honorably serve our country, as well as a threat to the discipline and the cohesion of our force.” Hagel’s predecessor, Leon Panetta, made similar comments when the media spotlight began to focus on the crisis. 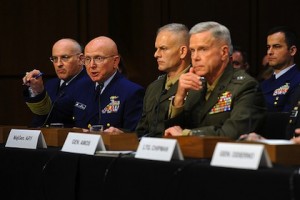 It’s a problem that needs addressing: Anonymous surveys revealed that as many as 26,000 service members said they were sexually assaulted in the previous year, according to a 2012 Pentagon report. However, only 3,364 assaults were officially reported in 2012. The high number of unreported assaults suggests many victims feel they can’t speak up without being ignored or punished.

Until this week, there was plenty of reason to doubt how serious the Pentagon was about preventing sexual assaults and improving reporting rates. That’s because the man they had in charge of this important mission, Major Gen. Gary S. Patton, had a documented history of intimidating whistleblowers.

Now, Hagel has announced that Patton was retiring. This news broke a few weeks after my organization, the Project On Government Oversight (POGO), sent Hagel a letter asking for Patton’s removal. We were joined by thousands of our supporters who also sent letters to Hagel.

Patton’s retirement, whether it was by his own volition or because of outside pressure, is the first step in restoring credibility to the Pentagon’s Sexual Assault Prevention and Response Office.

Patton was certainly the wrong person for this important position.

A Pentagon Inspector General’s investigation found that in Patton’s previous assignment as a deputy commander of a NATO training mission in Afghanistan, he and another general prevented underlings from speaking to investigators examining claims of fraud and rampant patient abuse at Dawood National Military Hospital in Kabul.

Although Patton denies he ever stood in the way of investigators, witnesses say they saw him doing just that. One nurse at the hospital told the Project On Government Oversight that Patton stopped him from showing investigators a man with misaligned bones due to a botched surgery.

Patton poked the nurse in the chest and barked, “You need to stay in your [expletive] lane,” then continued, “If you don’t know about bones, you don’t talk about bones.”

Blocking an investigation into wrongdoing is not just unconscionable, in this case, it’s also illegal. Restricting communications with Inspector General investigators is a violation of the Military Whistleblower Protection Act.

Even more troubling is the extent of abuse involved.

During a congressional hearing last year on abuses at the Dawood Hospital, Rep. Jason Chaffetz (R-UT), chairman of the House Oversight and Government Reform Subcommittee on National Security, said: “Evidence indicates that wounded Afghan soldiers endured starvation, bed sores, and gangrene. Some patients were extorted for medical care, while others were abused, neglected, and made to suffer. Afghan doctors operated in smoke-filled rooms without anesthesia or painkillers. Maggots crawled from festering wounds. Some patients died from lack of care.”

It’s troubling that the Pentagon would have put someone with that history in a position where he would be the chief advocate for some of the military’s most vulnerable and traumatized whistleblowers.

Confronting the military’s culture of sexual assault is a major challenge. Knowing that a commander with a record of intimidating whistleblowers won’t be leading the fight is a step in the right direction.

Avery Kleinman is the Beth Daley Fellow at the Project On Government Oversight. POGO.org
Distributed via OtherWords (OtherWords.org)