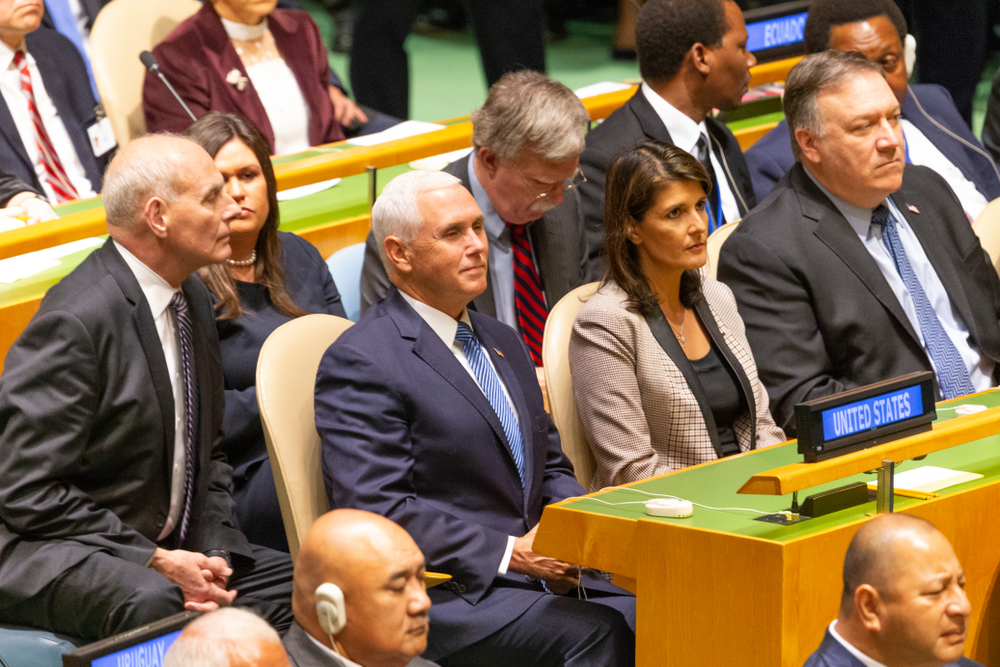 Do we think people who armed death squads and started wars really want to “bring democracy” to Venezuela?
By Peter Certo | January 30, 2019

For some months now, Venezuela’s socialist government has lurched through a series of escalating crises — hyperinflation, mass protests, political violence — while both the government and its opposition have flirted with authoritarianism.

It isn’t pretty — and to hear the right wing tell it, it’s the future the U.S. left wants for our own country. As if to prevent that, the Trump administration is now fomenting a coup in Venezuela.

They’ll tell you this about restoring “democracy” and “human rights” in the South American country. But one look at the administration officials driving the putsch perishes the thought.

Take Secretary of State Mike Pompeo, who recently spoke at the United Nations calling on countries to stand “with the forces of freedom” against “the mayhem” of Venezuela’s government.

This fall, the same Pompeo shared a photo of himself beaming and shaking hands with Saudi Arabia’s crown prince — just as the prince’s order to kill and dismember a U.S. resident journalist was coming to light. The same prince is carrying on a U.S.-backed war in Yemen, where millions are starving.

Does this sound like a man who gives one fig for democracy, or against mayhem?

Or take Pompeo’s point man on Venezuela, the dreaded Elliott Abrams. Pompeo said Abrams was appointed for his “passion for the rights and liberties of all peoples.” More likely, it was Abrams’ history as Reagan’s “Secretary of Dirty Wars” (yes, that’s a real thing people called him).

A singularly villainous figure, Abrams vouched for U.S. backing of a genocidal Guatemalan regime and Salvadoran death squads in the 1980s. And when a UN report cataloged 22,000 atrocities in El Salvador, Abrams praised his administration’s “fabulous achievement” in the country.

Abrams was convicted of lying to Congress about U.S. support for Nicaragua’s brutal Contras, but that didn’t prevent him from serving in George W. Bush’s State Department — which backed not only the Iraq war but an earlier coup attempt in, you guessed it, Venezuela.

“It’s very nice to be back,” Abrams told reporters. I bet!

Finally there’s National Security Adviser John Bolton, who recently took a cute photo with the words “5,000 troops” written on a notepad. Bolton still thinks the Iraq war was a good idea, and he’d like one with Iran too. Do we think it’s bread and roses he wants for Venezuela?

For all its faults, Venezuela achieved tremendous things before the current crisis — including drastic reductions in poverty and improvements in living standards. Mismanagement and repression may have imperiled those gains, but that’s no justification at all for the U.S. getting involved. In fact, U.S. sanctions have worsened the economic crisis, and U.S. coordination with coup plotters has poisoned the country’s political environment even further.

The future of Venezuela’s revolution is for Venezuelans to decide, not us. All that can come of more intervention now is more crisis, and maybe even war.

Instead of regime change, the U.S. — and especially progressive politicians (looking at you, Nancy Pelosi) — should back regional dialogue and diplomacy. While Democratic Party leaders appear to back Trump, a few representatives — like Ro Khanna (D-CA) and Ilhan Omar (D-MN) — are bravely backing a diplomatic course.

For all the right’s warnings that the left wants to “turn the U.S. into Venezuela,” we should pay careful attention to what the people who gave guns to death squads and destroyed the Middle East want to do with it. Because unlike the left, they’re already running our own country.

Peter Certo worked as a researcher for Right Web, an Institute for Policy Studies project that studies neoconservative foreign policy figures. He edits OtherWords.org, which distributed this piece.