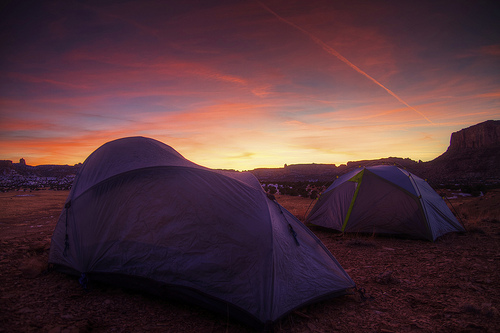 Flame retardants in everything from couch cushions to tents may be poisoning us all for no good reason.
By Jill Richardson | September 3, 2014

Popular activities like hiking, camping, and backpacking come with all kinds of risks. You can get heat stroke or hypothermia, run out of water, fall off a cliff, and bump into cougars or grizzly bears. If you get close enough to an infected ground squirrel for one of their fleas to hop onto your skin, there’s a chance you’ll catch bubonic plague.

Perhaps the only way to actually avoid risk is to stay at home indoors. Only if you do that, you’ll be at risk of diabetes and heart disease from a sedentary lifestyle — so you’d better go outside. 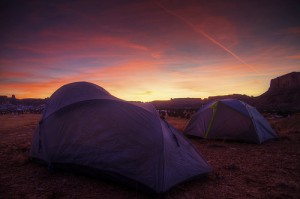 In other words, our lives are full of risks. Our job is to manage them. Sometimes it’s easy: Don’t hitchhike, don’t smoke, and wear a seatbelt. Sometimes, it’s more complicated.

I find it particularly shocking that they’re polluting most tents campers use to get some fresh air and enjoy the great outdoors.

Whether we’re spending time indoors or outside, do these chemicals really enhance our safety?

In 2012, the Chicago Tribune exposed the fact that many laws requiring flame retardants were initially put in place due to tobacco and chemical industry lobbying. A series of articles showed how these industries falsified and misinterpreted studies showing how many lives could be saved.

Flame retardant laws essentially gave the chemical companies that made them a rich new market while doing little to help prevent fires. Flame retardants also distracted the public from the dangers of smoldering cigarettes as the cause of fires in homes and on campsites.

By the time of these revelations, regulators had turned against the most common flame retardants, a group of chemicals called PBDEs. Two of the three most common versions were phased out internationally by the Stockholm Convention on Persistent Organic Pollutants, a treaty that bans the worst of the worst chemicals. The Environmental Protection Agency convinced the major manufacturers of the third PBDE to stop making it as of 2013.

That same year, California overturned its 1975 law requiring flame retardants in all couch cushions. Because many companies don’t want to make two sets of couches (one for California, one for everywhere else), the law meant that many sofas throughout the country contained flame retardants.

And yet, several states still have laws requiring flame retardants in common consumer products — from kids pajamas to camping tents. Manufacturers typically respond by putting the chemicals in products sold across the country.

The chemicals don’t make your furniture or camping gear fire-proof. Plus, modern tents are so lightweight that they have little fuel for a fire anyway.

A 2014 study found that many tents contained a cancer-causing chemical — and it came off on campers hands when they pitched the tent. Simply washing your tent won’t get rid of these chemicals. Manufacturers will soon phase out that chemical, but it’s being replaced with a new one that isn’t much better. Chemist Arlene Blum calls this “toxic whack-a-mole.”

Companies that make and sell tents refuse to say which chemicals they use, so consumers can’t even make an informed choice. When I spoke to employees of companies that manufacture tents, they told me they do not want to poison their customers. They wish the law would change — and they think the only way to change it is if their customers speak up.

You can contact your lawmakers, but make sure to also tell the store where you shop for tents that you want one without flame retardants. If enough people complain, REI, Cabela’s, L.L.Bean, and other vendors that sell outdoor equipment might respond.

Flame retardants are poisoning more people than they are saving. We need to speak up and get the outdated laws that mandate their use off the books.

OtherWords columnist Jill Richardson is the author of Recipe for America: Why Our Food System Is Broken and What We Can Do to Fix It. You can read her longer article about toxic tents at AlterNet.org OtherWords.org