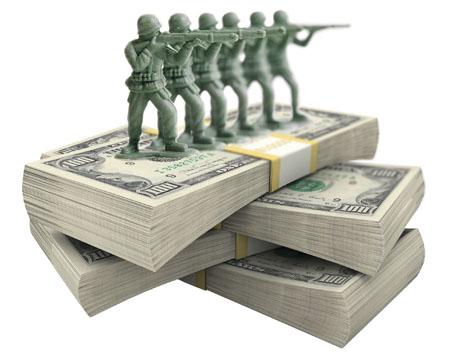 Instead of firing teachers, closing libraries and senior centers, and cutting bus routes, let's put the Pentagon on a diet.
By Mike Prokosch | February 6, 2012

Some Americans want to starve our cities, close our schools, and knock away the ladder that our children are supposed to climb to economic security. Your lawmakers may be among them.

The White House plans to release its proposed 2013 budget on Feb. 13. A free-for-all will ensue, as denizens of Capitol Hill compete for the titles of Biggest-Tax-Cutter and Baddest-Program-Slasher.

To appreciate how truly loony this is, consider how much we’re already hurting.

U.S. cities and towns have fired half-a-million workers since 2008, and another quarter-million municipal employees may lose their jobs by the end of this year. Venice, Florida is losing its fire marshal, deputy fire chief, and fire inspector. San Jose, California may have to shut down all its libraries and community center programs. Gardner, Massachusetts has one clerk running its municipal grounds, parks, playgrounds, cemetery, forestry, flood control, insect control, golf course, and swimming pool. Fond du Lac, Wisconsin cut city inspectors, police, and crossing guards. 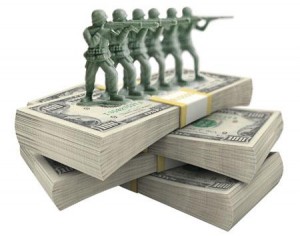 Los Angeles, like hundreds of other cities, is cutting back bus service and raising fares. Lincoln, Nebraska is deciding whether to close a fire station and leave one end of town without rapid fire and medical emergency responders. Baltimore has debated closing five of its firehouses. Other cities across the country are debating similar choices in their worst economic crisis since the Great Depression.

Our cities and towns need a helping hand from Washington. Instead, Congress is cutting funding they depend on. Under last year’s deficit-reduction deal, domestic spending is dropping about one-quarter from 2010 levels. Meanwhile, military spending, which is supposed to be cut equally, is barely being nicked.

What are they thinking?

Just before Christmas, the Iraq War officially ended. That was a very important moment for millions of Iraqis and thousands of our soldiers and their families. It could have been an important moment for taxpayers too. The war cost us $800 billion, and we could do a lot with that kind of money.

But if McCain and McKeon have their way, our cities aren’t going to be hiring back elementary school teachers, firefighters, or police offers, or providing more VA care to veterans or healthcare for millions of low-income kids. Instead, the Pentagon will continue to develop its F-35 stealth fighter, which costs $156 million per jet but can’t provide a steady stream of oxygen to the pilot. It will continue to build a new fleet of aircraft carriers at $9 billion apiece when no other country in the world has more than one.

It will spend several hundred billion dollars “modernizing” a nuclear weapons stockpile that Washington has committed to reducing. It will build new military bases in places like South Korea and Guam, where people don’t want them, even though the United States has more than 1,000 military installations around the world. We have so many overseas bases that there’s no agreement on how to count them all.

The Pentagon can cut these programs and more without endangering our security or reducing healthcare and pensions for those serving in the military. In fact, we’ll be safer if budget cuts force the Pentagon, Congress, and the White House to focus on programs that actually improve our well-being instead of trying to police every corner of the world. And we’ll be a lot more secure if Washington shifts the savings to us and helps us get out of this Great Recession.

President Ronald Reagan had some advice for confronting bureaucracies like this: “Starve the beast.” It’s time for those who call themselves Reagan’s heirs to take his advice and put the Pentagon on a diet.

Mike Prokosch is the national coordinator of the New Priorities Network. newprioritiesnetwork.org
Distributed via OtherWords (OtherWords.org).