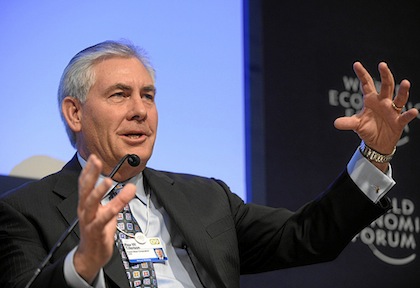 Some of the biggest supporters of fracking don't want it in their backyards.
By Jim Hightower | March 19, 2014

The 61-year old farmer from Bartonville, Texas is another victim of the fracking boom that has invaded people’s homes and lives nationwide, from upstate New York to Southern California. Millions of Americans have experienced numerous side effects from this massively destructive drilling process, including polluted air, contaminated water, depleted aquifers, multiple health problems, and even an inexplicable epidemic of earthquakes. 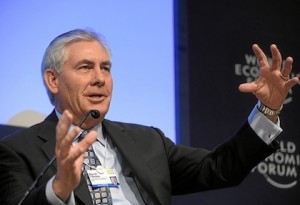 What ticked off Tillerson was the erection of a 160-foot-tall water tower built by a company that provides millions of gallons of water for fracking gas wells.

The frackers hadn’t counted on Rex getting worked up, speaking out, and suing the bastards. For Rex is no environmentalist. He isn’t objecting to the poisoning of people’s water. Nor does he object at all to fracking when it’s not so close to his own home.

Rather, Tillerson’s hopping mad because the 15-story tower stands above the tree line on his 83-acre, $5-million horse farm. It’s spoiling his view, threatening his property’s value, and causing lots of traffic.

Tillerson, you see, isn’t some local dirt farmer. He says he and his wife moved here to have a weekend getaway so they can enjoy the rural lifestyle.

He’s not a farmer at all — unless you count “farming the government” and harvesting billions of dollars in special tax breaks and subsidies. Rex (whose name means “king” in Latin), is the $40-million-a-year CEO of ExxonMobil. Now, guess which oil giant is the biggest fracker in the USA. That’s right. ExxonMobil.

So what we have here is a case of poetic justice. The cylindrical water tower that comes with the fracking territory is symbolically extending the middle-finger salute to Exxon’s CEO every time he visits his horsey farm.

What could be more fitting than a guy who has gained a personal fortune from the ugliness of fracking having some of that ugliness thrown right in his face?