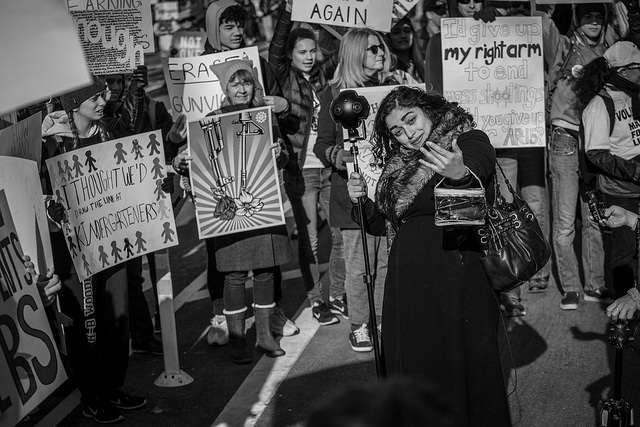 The March for Our Lives (Photo: Phil Roeder / Flickr)

The fight to curb gun violence must address the violence inflicted by law enforcement.
By Ebony Slaughter-Johnson | April 11, 2018

This spring, an estimated 800,000 Americans gathered in Washington, DC to participate in the “March for Our Lives” organized by the teenage survivors of the school massacre in Parkland, Florida. Thousands more attended 800 sister marches across the nation and around the world for gun reform.

Gun control is often portrayed as a “white” issue, but the march was encouragingly intersectional. Organizers shared the stage with members of black and brown communities whose daily encounters with gun violence are rarely treated with the kind of media attention the Florida students have gotten.

A number of the Parkland students have been upfront about the privileges afforded to them by their race and socioeconomic status — and have used these privileges to create space for those from other communities. Alongside them were activists of color from Los Angeles, Chicago, and Washington, DC who testified to their personal experiences with gun violence.

There was no doubt at the March for Our Lives that black lives matter. National events still show, however, the extent to which black life is devalued.

On April 4, Saheed Vassell was killed by law enforcement officers in Brooklyn. He was unarmed and suffering from mental illness. What the officers claimed they thought was a gun was shown to be a piece of a welding torch Vassell used for work. 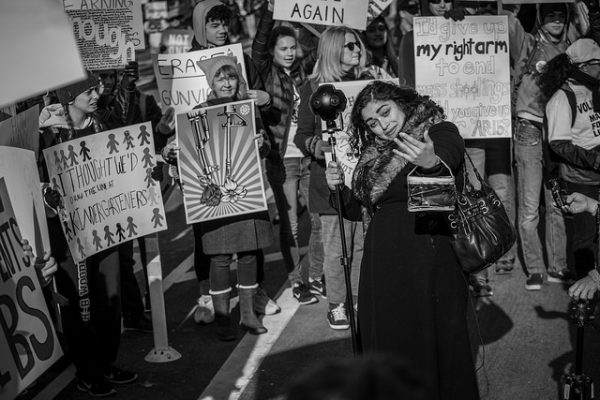 The March for Our Lives (Photo: Phil Roeder / Flickr)

On March 18, Stephon Clark, an unarmed black man, was killed by law enforcement officers in his grandparents’ backyard in Sacramento, California. He too was unarmed. Clark was shot at 20 times and hit eight times in the back.

Some 590 Americans were killed in mass shootings last year, according to MassShootingTracker.org, which counts events in which four or more people are shot. But that figure almost pales in comparison to the number of Americans subjected to gun violence by law enforcement.

According to the Washington Post, law enforcement officers shot and killed 987 Americans in 2017 alone. Despite constituting 12 percent of the population, nearly a quarter of those shot were black Americans. Of those 223 black Americans, all but nine were black men.

Because police don’t report this data themselves, counts can vary. MappingPoliceViolence.org, counting more than just shootings, determined that law enforcement officers killed 1,146 Americans in 2017. Similarly, one quarter of those were black.

Gun violence is devastating in all its forms and must be addressed at all levels of government. However, there’s something truly perverse about the frequency of the violence inflicted by law enforcement upon the communities they’re called to serve and protect.

Shootings in schools, wealthy suburbs, and city centers can be curbed with legislation that mandates universal background checks, a ban on bump stocks, a ban on assault weapons, and an increase in the age at which Americans are able to purchase guns.

But to those common demands I’d add: There should be more sensitivity training for law enforcement, community policing, and weapons training that reinforces that there are other ways to subdue a suspect than to kill them.

At the very least, all officers should be required to wear body cameras properly at all times. An officer that cannot be trusted to operate a body camera in good faith — like the ones who killed Stephon Clark after muting theirs — cannot and should not be trusted with a weapon.

If the movement behind the March for Our Lives wants to address gun violence in its totality, it should keep reaching out to all affected communities. And it must not only speak to instances of mass gun violence, but also to gun violence inflicted by law enforcement every day across the country.