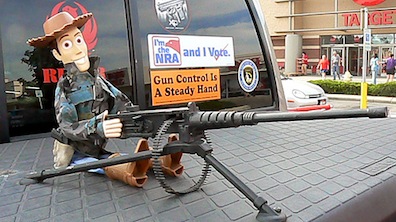 Why Politicians Shouldn’t Fear Getting an F from the NRA

Only a third of U.S. households possess guns, down from 50 percent four decades ago.
By Emily Schwartz Greco, William A. Collins | November 13, 2013

As plenty of unarmed Americans have deduced, our gun-toting brethren live in a propaganda-induced nightmare world. They envision armed, foul-smelling villains either breaking into their snug homes or menacing them on the street.

In response, our gunslingers plan to either whip out their concealed weapons or rush to their basements, unlock their protected pistols, load them, and dispatch their patiently waiting assailants.

That’s not how things work in real life most of the time. 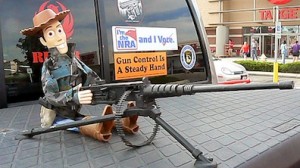 While “justifiable homicides” do occur, they’re rare and outnumbered by criminal and self-inflicted gun deaths. Most are committed by law enforcement officers, according to the FBI.

In 2010, private citizens across the nation committed only 278 of the homicides officially deemed “justified.” Meanwhile, the Centers for Disease Control and Prevention counted 11,000 firearm killings.

Most gun deaths are self-inflicted — about 20,000 Americans commit suicide with a gun every year.

More of this kind of data might help spur efforts to reduce the unnecessary bloodshed. But Congress has legislated that no federal money may be spent on gun violence research by key players such as the National Academy of Sciences, the CDC, and the FBI. So don’t wear your eyes out looking for gun research from those agencies.

Why would Congress choke off this information? The gun lobby put them up to it. Yes, that pillar of the American economy that makes consumer-grade firearms spends mightily to keep gun access free and easy. In the first quarter of this year, the National Rifle Association dished out at least a record $800,000 to lobby the federal government.

Of course, that’s chump change for companies with annual sales of nearly $32 billion.

Connecticut’s new gun laws passed after the Newtown massacre are inspiring threats from local gun companies that may move to more enticing jurisdictions in the gun-friendly South. They may actually go, and the governor is taking a lot of heat over this potential job loss.

Those jobs probably aren’t heading to Virginia. That state may be the home of the National Rifle Association’s headquarters, but Democrat Terry McAuliffe just beat Republican Ken Cuccinelli by a 2.5 percentage-point margin to win the state’s gubernatorial election.

As a candidate, McAuliffe made no effort to hide his F rating from the NRA.

“I don’t care what grade I got from the NRA,” McAuliffe said during a debate shortly before his election. “I never want to see another Newtown or Aurora or Virginia Tech ever again.”

Cuccinelli demonstrated his trademark tastelessness by vaunting his A rating from the gun-lobby group during a debate at Virginia Tech, the site of a mass shooting in 2007 that killed 32 people.

McAullife’s win isn’t the only sign that the gun lobby could lose its grip.

There’s a decline in gun ownership too. The number of guns in the country is growing but the share of U.S. households electing to own firearms is falling. In 1973, half of Americans lived in a home with at least one gun. By 2010, less than a third did.

More politicians are bound to deduce, like McAuliffe did, that packing heat doesn’t entitle anyone to cast extra ballots.