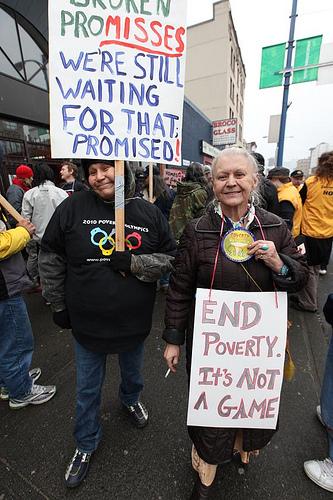 The mainstream media needs to step up its reporting on poverty as a campaign issue.
By Peter Hart | September 17, 2012

If you listen to the experts, the presidential election comes down to one thing: the economy. The job market is awful, and both of the major party candidates talk a lot about what they propose to do to strengthen the middle class.

But what about the poor?

Forty-six million Americans are living in poverty. This fact gets one day of attention in the news media each year — when the Census Bureau releases its latest figures, as it did earlier this month. And then poverty mostly fades from journalists’ radar screens. 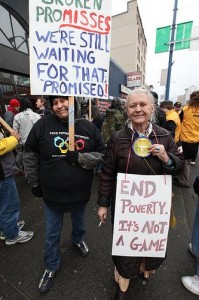 Election years are no exception. A new study by my colleagues at Fairness & Accuracy In Reporting (FAIR) shows that poverty is essentially invisible in reporting on the presidential campaign. The prominent news outlets we surveyed devoted just 0.2 percent of campaign coverage to substantive discussions of the issue.

Poverty is too important to soak up a mere 7.2 seconds per hour of campaign coverage. It affects over 15 percent of the U.S. population, nearly one in six of us. But FAIR found these 46 million people virtually missing when we looked at campaign coverage from January until the end of June by eight prominent news outlets: CBS Evening News, ABC World News, NBC Nightly News, PBS NewsHour, NPR’s All Things Considered, and the print editions of The New York Times, The Washington Post, and Newsweek.

The study counted campaign-related stories (news reports and commentary) that discussed poverty with just a minimal level of substance. We also counted campaign stories that mentioned poverty in less substantial ways or in passing — naming it as an issue but not discussing it at any depth.

While we found over 10,000 stories about the presidential campaign, just a tiny fraction addressed poverty in a substantive way. In fact, half of the outlets didn’t run a single campaign story about poverty. Stories that even mentioned poverty in passing were just 3 percent of the total. By contrast, “deficit” and “debt” — obsessions of the Beltway politicians — were mentioned about six times as often, in 18 percent of election stories.

Why isn’t poverty being treated as a campaign story? Surely one major factor is that the candidates themselves hardly speak about it in any serious way. Perhaps the most ink and airtime poverty has drawn followed one of Mitt Romney’s most memorable gaffes — the time he declared during an interview with CNN’s Soledad O’Brien, “I’m not concerned about the very poor.” That set off a short debate about whether the multi-millionaire presidential nominee actually meant what he said.

But the candidates’ failure to address poverty doesn’t excuse the media’s shameful performance. And it’s important to remember that in a profit-driven media culture, there are deeper factors at work.

Stories about poor people are simply not what advertisers want to have anywhere near their commercials, which are supposed to make consumers buy stuff. That makes it far less likely that TV outlets will spend much time on poverty at all. Indeed, an earlier FAIR study found that over three years (from September 2003 to October 2006), there were just 58 stories on the big networks that dealt with poverty.

Writing about a rare TV special on poverty that aired on ABC, one reporter noted that poverty was “deemed depressing and unappealing to the affluent viewers prized by advertisers.”

But amid the indifference of big media outlets and most political leaders, some exceptions stand out. Radio hosts Tavis Smiley and Cornel West spent September on their Poverty 2.0 tour, using their platform to draw attention to stories that are largely ignored. MSNBC host Melissa Harris-Perry has devoted considerable time on her program to poverty and inequality.

Their efforts are commendable. But in a healthy media environment, there would be many more journalists like them. And a healthy democracy would not treat 46 million of its most vulnerable citizens as an afterthought.