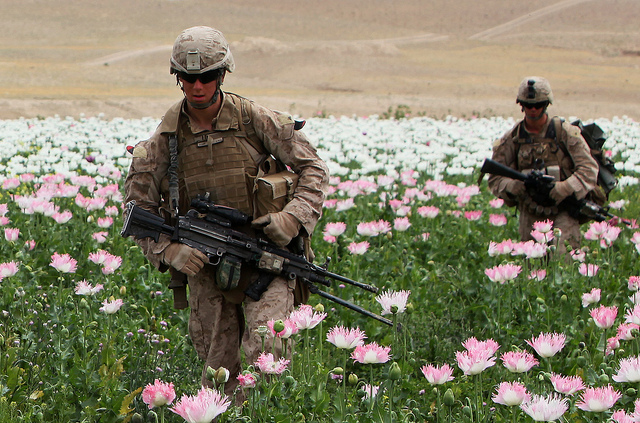 Even fields of flowers have gotten the best of us in that land.
By Jim Hightower | November 5, 2014

I have breaking news from the frontlines of the war.

No, not the new war in Iraq. That really is Iraq War III for us — our nation’s third trip there in just 25 years. Maybe the third try will be the charm, though I really don’t think there’s anything charming about it. 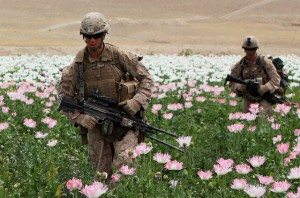 Nor do I mean our wars in Syria, Pakistan, Yemen, or…oh, who can keep up?

Rather, I mean our oldest ongoing war and the longest in American history, now going on 13 years: Afghanistan.

This life-destroying, money-sucking, soul-sapping wreck of a military escapade hasn’t gone at all well for Team USA. We’ve failed to crush the Taliban, plant the flower of democracy, or even slow the elite’s culture of corruption.

And now I bring hard news about the most modest of American goals in Afghanistan, namely defeating the poppy flowers. Yes, even fields of flowers have gotten the best of us in that woeful land.

After the Bush-Cheney invasion, a top U.S. priority was to stop the planting of poppies — the flower that produces opium and heroin. Afghanistan had become No. 1 in world opium production — the sale of the drug financed the repressive Taliban forces we had come to defeat.

For a decade, our troops played a leading role in eradicating poppy fields, lectured farmers, paid officials and farmers to switch to alternative crops, and waged all-out war on the pretty flower that can turn lives so ugly.

Having spent more than 10 years and $7.6 billion on the war on Afghanistan’s poppies, where are we?

More land than ever was dedicated to growing the flowers last year, reports John F. Sopko, the U.S. special inspector general for Afghanistan reconstruction. Those poppies yielded an all-time record harvest that generated some $3 billion in profits for the Taliban — a $1 billion boost from 2012, Sopko revealed.

And Afghanistan remains the undisputed leader of the opium business, having provided 80 percent of the world’s opium supply last year.

Just like the Iraq War, the war on Afghanistan’s poppies looks like it will drag on for years without any winners.