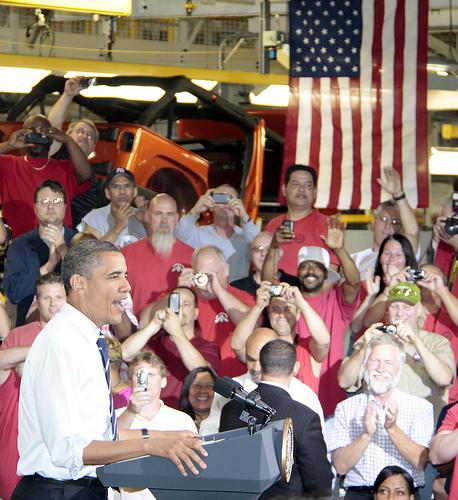 President Obama wants to align himself as a champion of the Middle Class. Photo by Chrysler Group.

Here's the good, the bad, and the ugly from a budget proposal where Obama is letting the 1 percent off rather easy, while the rest of us, especially the poor, shoulder the pain.
By Karen Dolan | February 14, 2012

Mitt Romney said it this way:

“We can restore an economy where everybody gets a fair shot, everybody does their fair share, everybody plays by the same set of rules — from Washington to Wall Street to Main Street. That’s the America we believe in.”

Both want to appeal to a hurting middle-class electorate. Only one has a populist message with appeal and effect. He most likely will win re-election in 2012. 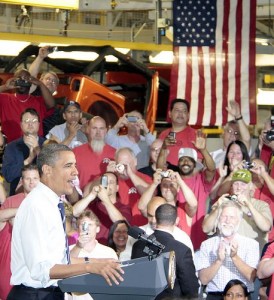 President Obama wants to align himself as a champion of the Middle Class. Photo by Chrysler Group.

Obama’s $3.8 trillion 2013 budget proposal, with its 10-year outlook, is by design a populist campaign tool. Though not politically viable now, his newly released budget is critically important in this election year both for the values it reflects, the vision it promotes and the potential it promises.

Obama’s budget has a populist tone, appeals to the middle class, and has some good proposals, both on investment and revenue-raising. But it also reflects the strict spending caps mandated this past summer by the Budget Control Act and hits some struggling families hard. It doesn’t go nearly far enough in revenue-raising. For instance, it does’t propose a tax on financial transactions that would curb Wall Street’s worst speculation or propose significant corporate tax reform that would actually raise needed funds. And, by reducing non-security discretionary spending from its current 3.1 percent of GDP to a 50-year low of 1.7 percent over the next decade, a lot of pain will set in when the populism starts to wears off.

Let’s start with the good. Among the good proposals on investment side:

And, among good proposals on the revenue side:

On to the bad. Here are some aspects of Obama’s proposed budget that aren’t as good as they might first seem:

Now, for the Ugly: Last year’s Budget Control Act mandated $1 trillion in discretionary cuts. Much of that must come from programs that low-income people rely on for critical human needs. After a hard year of cuts in 2011, this budget proposal calls for a devastating 14 percent cut in social spending. Here are some examples where cuts occur:

This budget proposal will appeal to the middle class and puts Obama in a more popular position than Romney as the 2012 presidential election season heats up. But while this budget has the populist thrust of cutting long-term deficit and debt by attempting to balance spending cuts and revenue increases, it falls short. It bolsters some needed programs, but unnecessarily defunds others. By not calling for all of the Bush era tax cuts to expire, not calling on Wall Street to pay its fair share through enacting a small levy on speculative financial transactions, not cutting military base and war spending deeply enough and not calling for the kind of corporate tax reform that will produce revenue, Obama is letting the 1 percent off rather easy, while the rest of us, especially the poor, shoulder the pain.