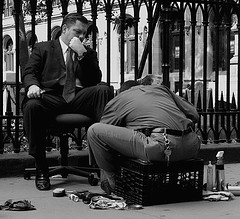 The market has stopped working for working people.
By Sam Pizzigati | July 10, 2013

Why does O’Grady, the general secretary of the UK’s Trades Union Congress, want us talking “predistribution”? In our staggeringly unequal modern times, her union federation argues in a just-released research paper, redistribution has run its course.

The rich — on both sides of the Atlantic — have seen to that. Over recent years, they’ve systematically dismantled progressive tax systems, the traditional route to redistributing top-heavy concentrations of income and wealth.

Even worse, the rich and their cheerleaders have turned redistribution into a political four-letter word. They’ve branded anything that smacks of redistribution a dangerous assault on the “natural” wisdom of the market economy. We must let the market, their argument goes, reward the enterprising and punish the lazy. Or else risk eternal economic damnation.

In reality, of course, markets don’t just reward the enterprising. They reward price-fixers and union-busters, monopolists and folks who are just plain lucky. And if you inherit a grand fortune, the market will merrily heap rewards your way year after year, no matter how lazy you may be.

Markets, in short, don’t follow “natural” laws. They reflect existing power relationships. Those who hold power bend the rules, formal and informal, that determine how markets operate — and who profits the most from them.

Back in the mid-20th century, in both Britain and the United States, average citizens wielded enough power through trade unions and at the ballot box to impact those rules. But that power has ebbed. The rich have rewritten the rules — and lined their pockets.

How profoundly are the new rules — on everything from minimum wages to collective bargaining — depressing wages in Britain and the United States? In the UK today, 20.6 percent of employees work in jobs that rate as “low wage,” that is, pay less than two-thirds the nation’s median paycheck.

Only one other major developed nation in the world — the United States — has a higher share of workers in low-wage work. That U.S. share: 24.8 percent.

Other nations are doing far better at making work pay. In France, only 11.1 percent of workers labor in low-wage jobs. In Norway, only 8 percent. More progressive taxes by themselves, British labor analysts argue, won’t be enough to undo the stark inequality the rule changes of recent years have created.

We can’t, in other words, just redistribute. We need to predistribute — end those marketplace practices that steer the wealth our economy creates away from the people who actually create it.

The British Trades Union Congress is now advancing a game plan for forging “a more equal distribution of wages before taxes and benefits.”

The labor group’s new paper, How to Boost the Wage Share, explores a package of proposals that target “the root causes of rising inequality rather than concentrating on tackling the symptoms through redistribution.”

At the nuts-and-bolts level, these proposals range from hiking the minimum wage to placing worker representatives on the corporate boards that set executive pay.

Overall, many of these ideas mirror notions that also appear in Prosperity Economics, a paper by Yale University’s Jacob Hacker and Nathaniel Loewentheil, that American unions have enthusiastically embraced.

Both these American and British analyses stress the importance of “rebalancing the economy away from low-paid work.” And what if we don’t? What if we let the worker wage share continue to decrease? What if we continue to let the powerful and privileged grab with such unfettered abandon?

Without measures aimed at “raising the earnings floor” and “capping excessive rewards at the top,” the British Trades Union Congress argues, the “recovery” from the global economic collapse that began in 2007 will remain a nonstarter.

“Ultimately,” the British labor group concludes, “creating a lower gap will depend on a fundamental shift in the balance of economic and social power.”

In a word: predistribution.