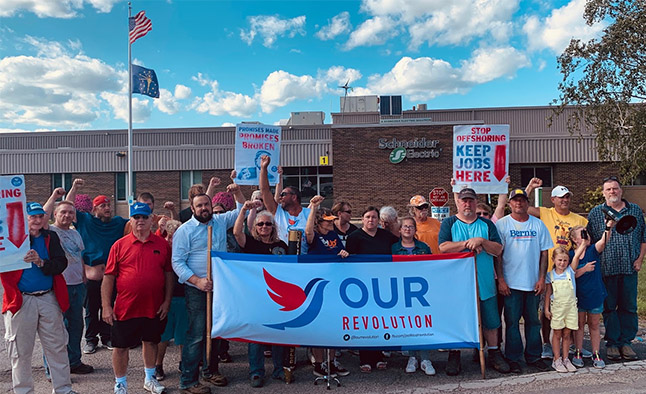 Workers rally outside the Schneider Electric plant in Peru, Indiana. (Photo: Our Revolution)

President Trump: I’m One of the Workers You Lied To

Trump keeps giving tax breaks and federal contracts to companies that send Midwestern jobs — like mine — out of the country.
By Tracey Aikman | September 18, 2019

My entire working life has been dictated by offshoring. I’ve spent my career jumping from one factory closing to another.

When President Trump was elected, he said: “Companies are not going to leave the United States anymore without consequences.” His promises ring hollow to me after I got my latest layoff notice.

My first job out of high school was at a factory owned by United Technologies in Wabash, Indiana. I showed up to work in March 1991 and a sign on the door read: “Moved to Mexico.” My mother, who worked for a sister factory, also lost her job when her factory was sent south of the border.

I eventually got a union job at Chrysler in Kokomo, Indiana, which allowed me to give my family a middle-class life and build our dream house on five acres of land. In 2008, I got laid off. I lost my house and had to start over financially.

When I got my job at Schneider Electric’s “Square D” plant in Peru, Indiana five years ago, making electrical boxes and equipment, I hoped that this job would sustain me until I was ready to retire.

Unfortunately, the multinational corporation that owns our plant announced this summer that they would be moving our work to Mexico and other plants. Once our plant closes, all of Schneider Electric’s North American factories will be non-union.

Now I’m facing another layoff, even though our Peru plant was profitable. In fact, the same week I was laid off, Schneider Electric announced profits of $2.2 billion for the first half of 2019.

I’m not alone. Workers across the Midwest are suffering the same fate. And President Trump continues to fail us. Instead of punishing companies like Schneider Electric, he has rewarded them with $120 million in federal contracts and a massive tax break. The closure of my factory is sad proof that Trump’s lies have consequences.

Trump’s broken promises have become a broken record destroying our communities, even though here in Miami County, we gave him the vast majority of our votes in 2016.

Right now, Our Revolution, a political advocacy organization inspired by Sen. Bernie Sander’s historic presidential run in 2016, is helping to organize a miracle effort to save our plant. Joined by workers from the shuttered GM plant in Lordstown, Ohio and workers from the Carrier plant in Indianapolis, we are calling on Trump to sign an executive order that would prevent taxpayer dollars from going to companies that are shipping American jobs overseas.

President Trump: Use the power of the government over federal contracts to stop our jobs from leaving the United States. Show us that you mean what you said when you promised to be a workers’ champion.

We need your help now — and we’ll remember if we don’t get it.

Tracey Aikman is sick and tired of mass layoffs in the Midwest. He has been laid off by global corporations United Technologies, Chrysler, and now Schneider Electric. He is married and is a father of two. This op-ed was distributed by OtherWords.org.