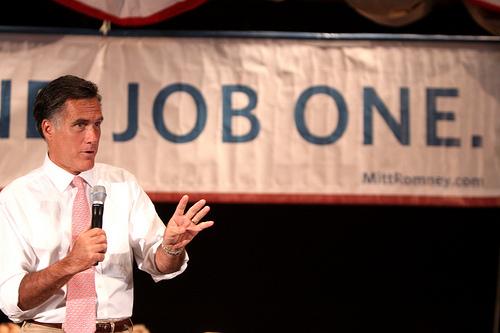 The Republican obstruction of job-boosting policies helps the GOP run against a bad economy.
By Mitchell Zimmerman | October 3, 2012

Mitt Romney says President Barack Obama should be fired because he failed to fix the economy. This reminds me of the classic practitioner of “chutzpah” — the man convicted of murdering his mother and father who throws himself on the mercy of the court as an orphan.

Since the beginning of Obama’s presidency, Republicans have focused on one thing — making him a one-term president. Their strategy for achieving that goal: sabotage economic recovery, keep unemployment high, and blame Obama for it all. 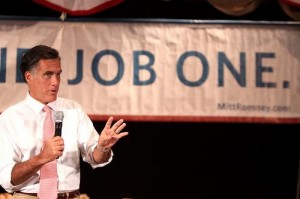 When George W. Bush’s presidency ended nearly four years ago, the financial crisis was deepening and the economy was going into freefall. Obama and Congress halted the collapse by enacting a stimulus program to kick-start the economy. The alternative: Watch America slide into a second Great Depression, as the economy shed 700,000 to 800,000 private sector jobs per month.

Yet Republican lawmakers just said no. Every Republican House member voted against the stimulus, as did 38 of 41 Republican senators. What did they propose to do about the crisis? Nothing, except — you guessed it — cut taxes.

That is still the GOP’s only prescription for America’s ills. But U.S. businesses don’t need more tax cuts to create jobs — American nonfinancial companies are sitting on a record $4.8 trillion in cash right now, according to columnist David Cay Johnston.

The 2009 Recovery Act directly funded the creation of jobs all across America, and supported education, public safety, rebuilding infrastructure, and investing in renewable energy. The non-partisan Congressional Budget Office estimated that this measure boosted employment at the end of 2010 by up to 3.5 million jobs.

But when the stimulus money started to run out in 2011, Republicans used their control of the House and their veto power in the Senate to prevent further job creation. Instead, they made austerity and budget deficits their priority.

“Austerity” meant cutting spending on the things America needs, like public schools, environmental protection, veterans’ health benefits, food and drug safety inspections, and highways. When you cut government spending on such programs, it means that people aren’t hired to do these things or they are fired. Their families spend less because they are out of work, so demand for other goods and services weakens, and jobs are lost in other parts of the economy, too.

You can argue that the deficit must be cut. You can’t argue that austerity increases employment. When you save government money by causing hundreds of thousands of workers to be laid off, we call that unemployment.

Cutting back on government spending during hard times has been tried before. In the depth of the Great Depression in 1933, unemployment was almost 25 percent. After four years of the New Deal, by 1937, the jobless rate dropped to 14 percent. But then the budget hawks of that era reduced government spending and tightened credit. The result: Unemployment leaped 5 percent and the Depression dragged on another four years.

When our economy has fully recovered, it will be time to tackle the deficit. But not now.

Republicans have come close to admitting it. Last year, Texas Gov. Rick Perry actually threatened the head of the Federal Reserve Bank, saying it was “treasonous” for the Fed to try to stimulate the economy before the election. This would be “playing politics.” Last month, Republicans resumed their efforts to bully the Fed into inaction, again attacking it for focusing on unemployment.

Who is the real traitor to the people of America? Someone in government who tries to reduce unemployment, or those politicians willing to prolong the misery of millions of unemployed Americans because they hope it will help win an election?