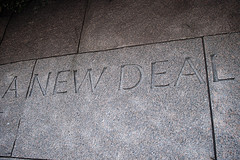 The economy that matters is measured by whether enough Americans hold decent jobs, not the Dow Jones Industrial Average.
By Richard Kirsch | June 5, 2013

With the stock market breaking ever-higher records, Americans should be celebrating our economic resurgence, right?

After all, why else are we supposed to care when the Dow ticks up or down? Although half of us own no stocks at all and the richest 10 percent of us own just about everything traded on the market, isn’t it a reasonable measure of our economic progress?

Well, no. Rising stock prices are getting a boost from expanding corporate profits. That may sound good, but one big factor behind those profits is that corporations are finding more and more ways to take more of the nation’s wealth and give less of it to the people who do the work. Their strategy is simple: employ fewer people and pay them less.

The New York Times laid out this story in an article headlined, Recovery in U.S. Is Lifting Profits, but Not Adding Jobs. “A golden age for corporate profits,” the Times reports, has been fueled by companies using more technology to replace workers, shipping jobs overseas, and cutting their remaining U.S. workers’ pay.

The result is that while corporate profits comprise the biggest share of national income since 1950, employee income constitutes the smallest share since 1966. It’s gotten worse since the Great Recession, with corporate profits rising 20 percent a year since 2008, but disposable income inching ahead 1.4 percent after inflation.

And that meager rise in personal income? It’s all going to the rich.

In addition to employing fewer workers, companies are paying the workers they must keep on board less. This is particularly true in industries where jobs can’t be shipped overseas or workers readily replaced by robots.

Most of the new jobs created in recent years are low-paying. They’re growing almost three times faster than mid-and-high paying jobs. In the four years since the recession officially ended, most job openings have been in retail, food prep, construction, and home health care.

This trend is speeding up the hollowing out of the middle class. It’s a recipe for economic disaster.

While the economy you hear about on the nightly news may be measured by the Dow Jones Industrial Average, the economy that matters in the long run is measured by whether enough Americans hold jobs with decent pay and benefits.

Working families and the middle class are the engines of the economy. When people have good jobs and affordable health care and can shop in their neighborhoods, send their kids to college, and retire in security — that’s what drives the economy forward.

A low-work, low-wage economy, with most people struggling to meet the basics and a few people living in luxury, is also a threat to our democracy.

As Supreme Court Justice Louis Brandeis observed more than a century ago: “We can have democracy in this country, or we can have great wealth concentrated in the hands of a few, but we can’t have both.” His words are just as true today.

For Brandeis’s generation, the popular movements that powered the New Deal paved the way for broadly shared prosperity. What will it take now?

The answer, as it was in the 1930s, is well-organized social movements. There are some early signs of these movements gaining traction in the one-day strikes by fast food workers around the country and in other new forms of worker organizing, like the taxi drivers’ alliance in New York City and tomato pickers in Florida. Some local campaigns are securing the right to paid sick days in cities and states — historically, this kind of precedent paves the way for national change.

This is the beginning of the movement that will define the 21st Century: the fight to demand an economy based on prosperity for all, grounded in work that is sustainable for families and the planet.