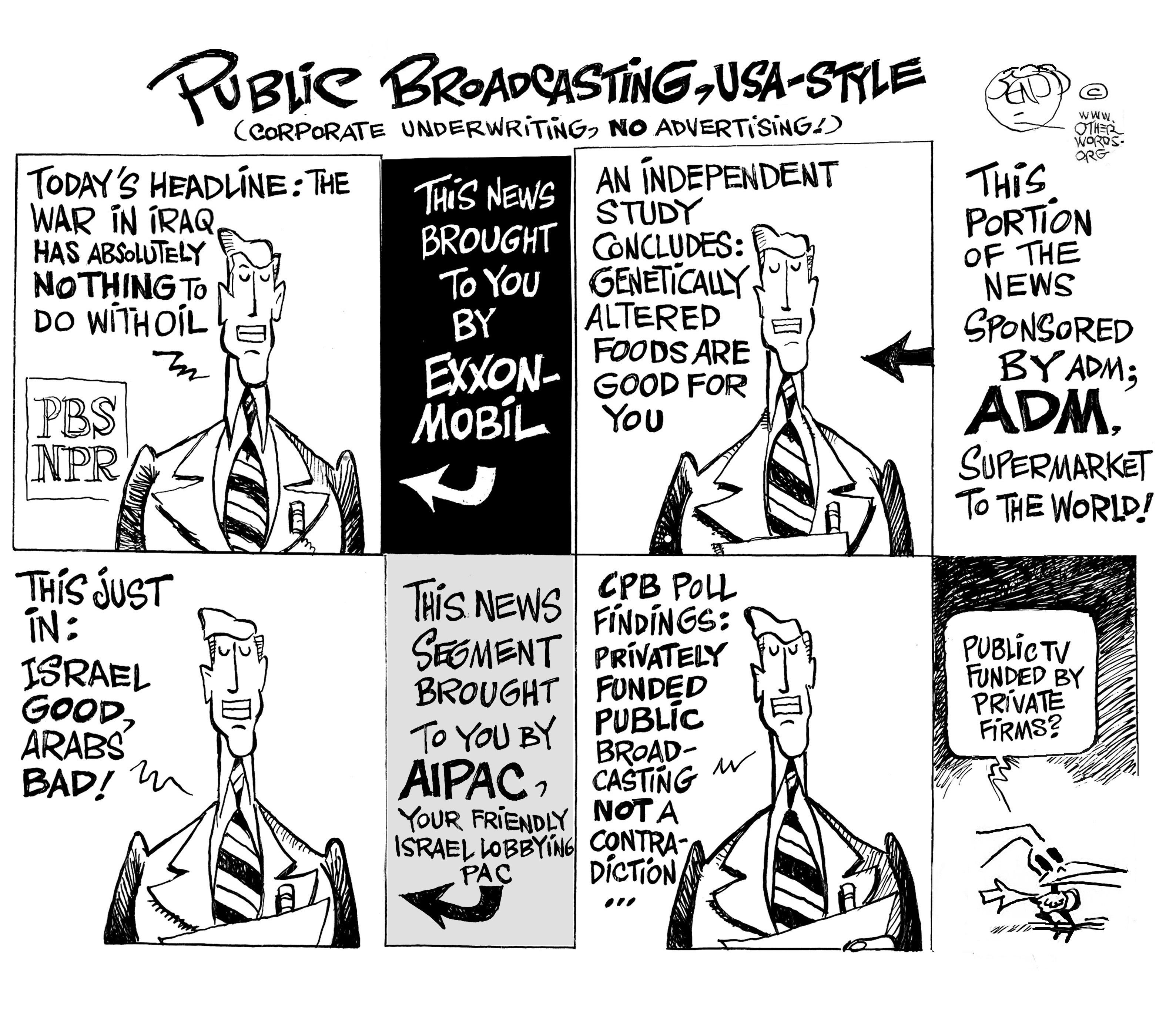 Public TV? It Would Be a Good Idea

The same white, male, and elite voices dominate the conversation on PBS as on the corporate networks.
By Jim Naureckas | October 25, 2010

Asked by a reporter what he thought of Western civilization, Mahatma Gandhi supposedly replied, “I think it would be a good idea.” The same could be said about U.S. public television.

Public TV was created 40 years ago because the public understood that the funding from advertisers and the profit motive put limits on commercial broadcasting. Public TV’s pioneers saw that only a system freed from these restraints could openly criticize corporate power and reach those parts of our society that advertisers aren’t particularly interested in. Such a system, they knew, would rewrite the rules of U.S. media. 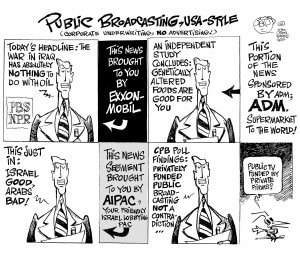 Unfortunately, public TV’s independence was compromised early on. The system requires most shows to get corporate funding to get on the air, giving big business just about the same gatekeeper role it plays in for-profit media.

Conservative threats by Sen. Jim DeMint (R-SC) and other lawmakers to choke off federal funding have left managers at public broadcast stations leery of any sign of progressive content. These pressures too frequently result in the Public Broadcasting Service’s public affairs programming looking little different from commercial TV offerings, as studies by FAIR (my organization) of PBS sources have documented repeatedly since 1993.

Of course, there have always been PBS producers striving to fulfill public TV’s mandate. Two of the most notable efforts in recent years to open up the TV debate to unheard voices have been Bill Moyers Journal and Now. Unfortunately, both these shows ended their runs this year–with Moyers’ retirement and Now’s cancellation by PBS.

In their place, PBS gave us Need to Know–with co-host Jon Meacham, a for-profit media fixture whose selection raised serious doubts about how much the program intended to continue in its predecessors’ footsteps.

In light of these changes, FAIR decided to take another look at what kind of an alternative is presented by public TV’s top public affairs shows. Looking at the guest lists across several weeks this year of Need to Know and the system’s flagship news show, the PBS NewsHour, as well as public TV warhorses Washington Week and Charlie Rose, the answer appears to be: not much.

All the shows’ guest lists were heavily tilted toward the same white, male, elite sources who dominate for-profit TV: Charlie Rose‘s guests were 85 percent male; Washington Week‘s were 94 percent white. Need to Know‘s sources were slightly more diverse, but most African Americans appeared in stories about drugs and prisons; in the show’s five segments on the economy, all sources were white.

NewsHour segments on the Gulf oil spill, the dominant story during the study period, featured four times as many oil industry representatives as environmental advocates. In two months of stories about the Afghanistan War, not a single NewsHour guest represented a group opposed to the war or expressed antiwar views.

Washington Week, the longest-running public affairs show on PBS, features a weekly roundtable of journalists–all of whom, with the exception of two appearances by an NPR reporter during the study, work for major corporate-owned media. Why do we need public television to tell us what journalists on commercial news outlets are already saying?

We found little evidence of PBS’s supposed “liberal bias.” In fact, among live partisan guests–as opposed to taped soundbite sources–Republicans outnumbered Democrats 3-to-2 on the NewsHour, and 2-to-1 on Need to Know.

Taken together, our research reveals a system that’s named “public” and gets funding from the public–but where the same elite voices dominate the conversation as on corporate TV, and the same white male biases squeeze out diverse perspectives. No doubt there are still people working at PBS who want it to carry out its original mission, but at this point the dream of a network that truly serves the public seems further away than ever.

Jim Naureckas is the editor of Extra!, the monthly journal of the media watch group Fairness & Accuracy in Reporting. www.fair.org