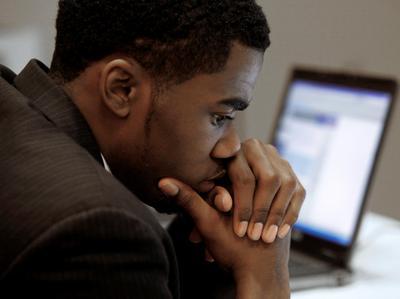 African Americans are disproportionately impacted by the Great Recession and the Great Disenfranchisement.
By William A. Collins | February 13, 2012

Last one hired,
First one out;
That’s what bias
Is about.

Given that we now have an African-American president, many Americans feel comfortable sweeping the issue of racial discrimination under the rug. How bad can bias be if we elected Barack Obama?

Well, pretty bad. The numbers are dismal. While white unemployment is stuck at around 7.5 percent, black Americans are suffering 16 percent. In terms of household net worth, it’s worse. The median for white families has slumped to $113,000, but black households have been reduced to an unsustainable $5,700, and Latinos to $6,300. Like many of our society’s economic gaps, this one is steadily widening, not least because people of color are often the first workers to be laid off.

And that’s not all. Many of those unindicted mortgage bankers purposely targeted African Americans with their twisted schemes. Now black homeowners are more than three times as likely to be evicted than their white counterparts. 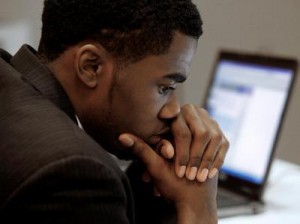 Budget cuts have produced similar sinister results. With state and local deficits spreading panic across the land, government employees are being laid off in droves. This is a double whammy for black Americans, for whom the public sector is the single biggest source of employment. As front-line municipal service providers to poorer citizens, their jobs are often the first to go. And needless to say, the low-income communities they serve are heavily minority too, so government downsizing leaves both provider and recipient alike to stew in the cauldron of poverty.

Nor is the Great Recession the only tsunami currently drowning the African-American community. The Great Disenfranchisement is hitting them hard too. Belligerent new Republican majorities in many legislatures are aggressively changing voting rules in ways that are likely to prevent many people of color from voting.

Laws supposedly aimed at curing nonexistent voter fraud now require state-issued ID cards, which aren’t easily acquired. These statutes, plainly aimed at black Americans, seniors, and students, have lately drawn the unhappy attention of the Justice Department. Some will surely be overturned under the Voting Rights Act, but nonetheless millions of Democratic-leaning citizens are likely to be denied the vote in 2012.

Meanwhile, racial profiling remains rampant in law enforcement, especially concerning drugs, for which mindlessly draconian penalties still endure. Presumably the cops believe that this profiling is what politicians really want. Unfortunately they’re probably right. Thus they keep it up relentlessly in the face of contrary laws and regulations.

So now it turns out that a couple measurable and understandable social phenomena have blossomed amid this flood of discrimination. The largest is the continued movement of blacks to the South, a trend that began in the late 1990s. Living is cheaper there, family roots can be embraced, and it’s warmer. Jim Crow may not be dead, but since he now lives in the North as well, what’s to lose?

Similarly, with jobs disappearing amid a hostile economic landscape, black women are joining the military in percentages far exceeding their numbers in the general population. It’s not a bad measure of how rotten their civilian life has become.