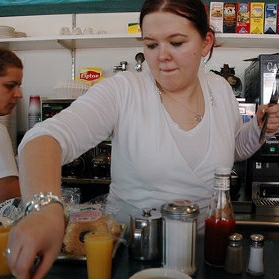 The rock-bottom pay mandated for tipped workers like servers in restaurants needs to rise from $2.13 an hour.
By Saru Jayaraman | September 18, 2013

As the fast food workers’ minimum wage campaign gains momentum, another group of workers is expanding the fight to address one of the least-known economic outrages.

You may not realize it, but the measly $7.25 an hour McDonald’s and other fast-food giants pay their workers is three times higher than what many large sit-down restaurants pay their servers.

Restaurant Opportunities Centers United (ROC United), which I lead, is fighting for an increase in the rock-bottom pay mandated for tipped workers. That federal sub-minimum wage is $2.13 an hour.

Take Darden, the world’s largest full-service restaurant chain and parent company of the popular Olive Garden, The Capital Grille, and Red Lobster eateries, among others. Most of Darden’s servers earn the minimum wage for tipped workers: $2.13 an hour. Since tips can prove unpredictable, these workers often face tremendous economic insecurity.

And it’s mostly thanks to aggressive lobbying by Darden and its competitors that the minimum tipped wage has stagnated since 1991. It hasn’t climbed a nickel despite multiple minimum wage increases.

Essentially, Darden and its cronies in the National Restaurant Association argue that they shouldn’t have to pay their workers wages — customers should pay their workers’ wages for them. These companies are prime examples of the eagerness of Big Business to make the public shoulder the burden of inadequate wages, all in the name of short-term profits.

One example of how these restaurant empires offload costs is Darden’s refusal to pay earned sick days. The result is that its servers — who endure a poverty rate that’s three times higher than the rest of the American workforce experiences — are compelled to work even when sick or injured.

The most dramatic example of the public costs of this risky business strategy was the Hepatitis A scare in August 2011 at an Olive Garden in Fayetteville, North Carolina. Because the infected server felt she couldn’t afford to miss a day’s work without pay, thousands of customers were put at risk and had to be immunized.

Especially when workers live entirely on tips because their wage is so low, they have no choice but to work when sick.

And who do you think paid for all those vaccinations? The North Carolina Department of Health and Human Services and the Cumberland County Public Health Department. In other words, Darden punted the bill to us, the taxpayers. This incident led to a class-action lawsuit against Darden. Customers understood the issue was not really about the server who got sick — it was about irresponsible business practices.

Despite the industry’s low standards, instances of racial discrimination, wage theft, and other exploitative practices, Darden still declares one of its core values to be establishing a “sustainable” working environment. But, as New York Times food columnist Mark Bittman says, “if you care about sustainability — the capacity to endure — it’s time to expand our definition to include workers.”

The recent wave of protests fast food workers are holding across the nation is building momentum for a higher federal minimum wage. In past battles, last-minute deals stripped raises to the federal minimum for tipped workers from the laws that ultimately went into effect.

ROC United and our allies like the National Employment Law Project are working hard to ensure that Congress doesn’t bypass an increase to the tipped-minimum wage again under lobbyist pressure.

Working together, we’ve made great progress: Lawmakers have introduced the Fair Minimum Wage Act of 2013 in both the House and the Senate. Plus, for the first time in two decades, this measure would significantly increase the minimum earned by tipped workers.

Please urge your lawmakers to support this legislation. Tell them it’s essential for the health and well-being of workers and everyone who ever dines in a restaurant.

Saru Jayaraman is the co-director of Restaurant Opportunities Centers United (ROC United), director of the Food Labor Research Center at the University of California, Berkeley, and author of Behind the Kitchen Door (Cornell University Press, 2013). ROCUnited.org