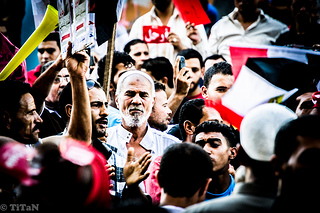 Rays of Hope in Egypt

The army and the restive millions had different grievances when Morsi was ousted on June 30.
By Ahmad Shokr | July 17, 2013

Three days before the coup that removed Mohamed Morsi from the presidency, I marched with tens of thousands of Egyptians to the presidential palace. A sea of protesters had filled Cairo’s streets, waving flags and chanting for the downfall of the regime.

As we passed a military compound, two soldiers leaned out a window and waved to the crowds. A man next to me joked, “The state is revolting against itself.”

He was partly right. Not because the throngs on June 30 were plants or dupes of the Egyptian army — far from it. The rallies against Morsi were a genuinely democratic uprising, a continuation of the revolution that began with the overthrow of the dictator Hosni Mubarak in 2011. The protesters weren’t rejecting the principle of Morsi’s election as president, but the notion that people have no say in their own governance once the elections are over.

My neighbor had a point, nonetheless, because there were plenty of plainclothes police and military officers milling about that day. These self-appointed stewards of Egypt’s “national security” were just as angry as the mass of ordinary citizens over the actions of Morsi and his organization, the Muslim Brotherhood. They rode the wave of popular dissent to sweep away the Brotherhood’s misrule and leave more congenial civilians in their stead.

The grievances of the army and the restive millions were not the same. The vast majority of the June 30 demonstrators loathed the Muslim Brotherhood’s self-seeking, secretive behavior in government. Many of these people objected loudly in November 2012, when Morsi tried to grab near absolute power for himself in a constitutional decree. They cried foul again when the Brotherhood rammed through a draft constitution tailored to appease hardline Islamists, as well as entrenched state institutions.

More than two-thirds of the electorate stayed away from the ensuing referendum. It was a sign of growing rebellion against the Brothers’ crude political logic: We won elections, so we can rule Egypt however we please.

The Brotherhood showed little interest in building a deeper democratic order. Its constitution preserved the army’s black budget and economic empire. And according to the Egyptian Initiative for Personal Rights, the police tortured and killed at nearly the same rate under Morsi as under Mubarak.

With this sweetheart deal, why did the generals stage a coup? Some of the brass felt the Brotherhood’s intransigence toward the opposition was causing instability. Others winced at the organization’s closeness to more radical Islamists who had once taken up arms. Still, others worried that the state was becoming dysfunctional. On June 30, the army saw a chance to preserve its privileges with fewer risks.

The media portrays Egypt as split in two — half cheering the coup and half pleading for Morsi’s reinstatement. The country is indeed dangerously polarized, but not between two prescriptions for the future. Most of the June 30 demonstrators showed no loyalty to any party and advanced no clear alternative to Morsi.

These people took a sort of refuge in the army as a guarantor of stability and an icon of past glory. But an important minority, like the man next to me in the march, denounced the generals and the Muslim Brotherhood in the same breath and reiterated the call for “bread, freedom, and social justice” that resounded in 2011. These guardians of the revolutionary spirit are rays of hope in dark days.