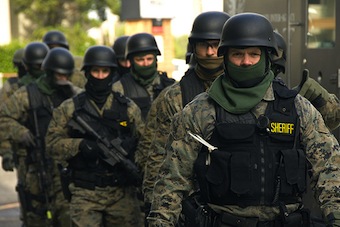 Razing the Garden of Eden

A Texas police operation resorted to paramilitary force in its fruitless search for pot plants.
By Jim Hightower | August 28, 2013

The Bible tells us that the Garden of Eden was heaven on Earth — until Adam ate that apple. Then all Hell broke loose.

At about 7:30 in the morning of August 2, a SWAT team of armed police agents, code enforcement officers, and narcotics detectives stormed Shellie Smith’s little organic farm — which she named “Garden of Eden.” 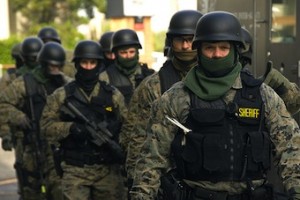 They burst through the gate, handcuffed the terrified residents, and held them at gunpoint while the agents executed the raid’s mission.

Which was what, exactly? “The purpose was to improve the quality of life [and] to resolve life safety issues within neighborhoods,” a spokeswoman for the city said.

It seems there had been complaints about marijuana being grown and about the place being unkempt.

So, what did the derring-do raiders achieve? They captured 17 blackberry bushes, 15 okra plants, 14 tomatillo plants, some native grasses, and all the sunflowers. Then they whacked down Shellie’s sweet potato patch with a Weed-Eater and seized the farm’s compost, along with some wooden pallets, old tires, and furniture.

Did you notice what they didn’t find? Marijuana plants. Nor any other illegal products.

Yes, based on a mere rumor, autocratic police power was unleashed to “improve the quality of life” in a Texan city by destroying an organic farm.

Why would police resort to paramilitary force just for a fruitless search for marijuana plants?

Right-wing officials and arms-industry lobbyists have been pushing ordinary law enforcement agencies across America to switch from a peacekeeping approach to an aggressive, militarized, SWAT mentality. Increasingly, our police departments are being armed, trained, and psyched to treat common citizens as enemies. To learn more, visit www.aclu.org/militarization