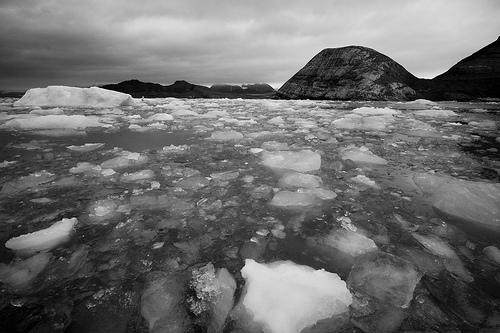 Melting ice in the Arctic near the original Nowhereisland site (Stefan Cook/Flickr).

Nowhereisland is about living kindly, governing gently, and not taking oneself too seriously.
By Peter Certo | July 23, 2012

The Olympic Games can draw unexpected visitors. Remember the Jamaican bobsled team? This year, it’s the delegation from nowhere.

Beginning in the games’ opening week, residents along the rocky coast of southwest England will meet Nowhereisland.

No — what? Its handlers call this hunk of grit a “displaced nation journeying south in search of its people.” The brainchild of British artist Alex Hartley, this “nation” is small enough to be hauled by a tugboat.

Back in 2004, Hartley journeyed to the Arctic, where he discovered an uncharted chunk of floating rock and moraine in the wake of a receding glacier. Hartley, the first person ever to set foot on the island, initially tried to claim it for himself — with a note left in an empty can of beans — to draw attention to the perils of climate change. 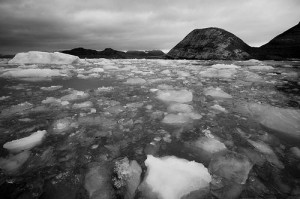 Melting ice in the Arctic near the original Nowhereisland site (Stefan Cook/Flickr).

Then Hartley thought bigger. The artist returned to the Arctic in 2011. He and his crew dug up some 6 tons of material from the island, dragged it into international waters, and christened it the newly independent nation of Nowhereisland. The island’s Olympic sojourn to the port towns of southwest England marks its contribution to the U.K.’s Cultural Olympiad, a national celebration of the arts accompanying the summer games.

This isn’t just a lark. “Nowhereisland seeks to redefine what a nation can be,” explains the project’s founding document. “Nowhereisland embodies the potential of a new borderless nation,” one “in which all are welcome and in which all have the right to be heard.”

I’m from Dayton, Ohio, and live in Washington, D.C. But I’m also one of the 13,000 people from around the world who have become citizens of Nowhereisland by applying through its website. The most important perk of citizenship, which takes just seconds to obtain, is the right to help craft the nation’s constitution. All of us Nowhere men and women can submit propositions for the country’s governing document and vote up or down on the inklings of our fellow citizens.

It’s an experiment in “open-source citizenship,” a new model of governance that several real governments are beginning to dabble in as well. Many U.S. regulatory agencies, for example, invite nonbinding public feedback on proposed new rules, and the British government recently brought on Wikipedia founder Jimmy Wales to help the U.K. civil service better engage the British public. Last year, Iceland even crowd-sourced its own constitution in the wake of the country’s catastrophic financial collapse.

Compared to such “real-world” examples, Nowhereisland might seem silly or impractical. Sure, propositions for its evolving constitution include a resolution encouraging Nowhereians to “rediscover the great value of slowness.” But other provisions are concrete and inspirational, such as a ban on corporate personhood. Another proposal imploring adults to read to children nightly is both heartening and constructive. The resulting mishmash is a charming treatise on living kindly and governing gently, while not taking oneself too seriously.

Nowhereisland proves that it doesn’t take fancy technology or big-name consultants to figure out what most people want. Most of us want a clean environment, an economy that works for everyone, and a say in our political process. Of course, this has never been much of a mystery outside of Washington and other world capitals.

If Nowhereisland provides a space in which to imagine a new world, the next step is to build it. Already, Occupiers in the United States, anti-austerity indignados in Europe, and protesters in the Arab world have shown what can be accomplished once ordinary people decide to stop demanding power and start exercising it.

These revolutions are far from complete. But the Olympic delegation from nowhere is a playful reminder that we can crowd-source a better world if we dare.

Peter Certo is an editorial assistant at the Institute for Policy Studies and a Nowhereian citizen.
Distributed via OtherWords (OtherWords.org)