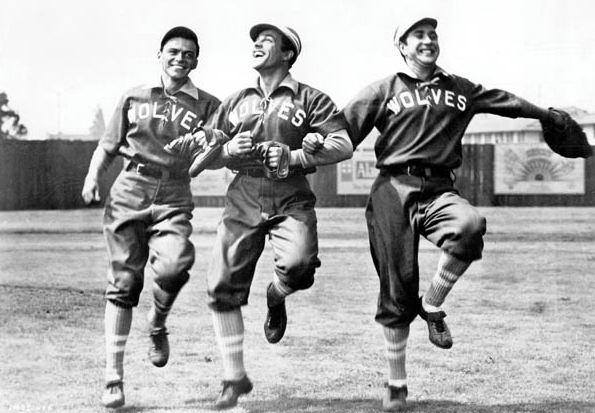 Refugees Are as American as Baseball

Our history of shutting immigrants out is matched by a long history of welcoming them in.
By Olivia Alperstein | December 2, 2015

I recently watched an old movie called Take Me Out to the Ball Game, a post-World War II Hollywood musical bursting with good ol’ U.S.A. pride. At the heart of the film is baseball, the quintessential American pastime.

O’Brien is Irish, and he sings about his proud immigrant father wearing his big green hat as he strode down Broadway on Saint Patrick’s Day. For many decades, Irish immigrants couldn’t walk down a street without getting harassed or beaten up, and some ugly stereotypes about Irish Americans persist even to this day.

Goldberg, who is Jewish, sings in a Russian accent about being forced to play violin as a little kid before discovering his calling. Jewish athletes played a huge role in American baseball back then, and young Jewish Americans embraced the sport like there was no tomorrow.

If we’d continued to bar generations of immigrants, we wouldn’t have David Ortiz, Jose Fernandez, Sammy Sosa, Ichiro Suzuki, or many other baseball greats who were born abroad. Without immigrants, baseball wouldn’t be what it is today, and neither would our country.

Sadly, restricting immigration from various parts of the world is part of our history. The Immigration Act of 1924 restricted visas to only 2 percent of the immigrants already residing in the United States from each country. And it completely excluded African and Asian immigrants.

The Chinese Exclusion Act of 1882 had already targeted Chinese nationals. It prohibited them from entering the country legally for several generations. Before World War II broke out, hundreds of thousands of would-be Jewish refugees were turned away by U.S. officials who refused to raise the immigration quota on Eastern Europeans in the face of a Nazi takeover of Europe.

Those are just a few examples. Plenty of us, including me, have ancestors who were lucky enough to make it here legally — and safely — despite belonging to some of the groups U.S. lawmakers tried to lock out. Many of them fled poverty, war, disease, and terror in every sense of the word.

But history has a way of repeating itself.

In response to the attacks in Paris, over 30 governors have announced that they’ll refuse to accept or help Syrian refugees placed in their states. They claim that our country’s rigorous screening procedures and two-year application process aren’t enough to reassure them that the Syrians who come to our shores aren’t terrorists, even though terrorism by refugees is virtually unheard of in this country.

In Washington, the House of Representatives recently passed legislation that could make it extremely hard to authorize the entry of Iraqi and Syrian refugees into the United States. As Representative Keith Ellison stated in a recent interview with Democracy Now, this is a bill “motivated by fear, motivated by xenophobia.”

We shouldn’t turn away refugees simply because of their country of origin. These people are our future doctors, scientists, lawyers, change-makers, and — who knows? — maybe even baseball players.

Fortunately, our history of shutting people out is matched by a long history of welcoming people into the fold. Let’s respond in the real American way this time. Let’s rise above the tide of fear and add to our melting pot.

Let’s save lives and welcome new families to our nation.