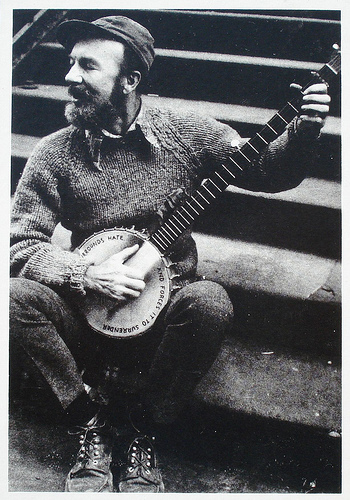 One of our great heroes died last night. At 94, I suppose it wasn’t a tragedy for him, especially since his wife Toshi died last summer after a life of love and shared work, and 70 years of marriage, but what a huge loss. For all of us.

Pete gave us everything — inspiration, humor, organizing, collective empowerment. And Pete – and now his legacy — remain among the most principled and committed of our artists. He never lost his way in the toughest battles — through the civil war in Spain and the depression, through the perils of the McCarthy era when he showed up after being subpoenaed, but refused to testify about his ideas or associations. 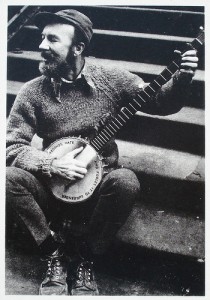 “I feel these questions are improper, sir, and I feel they are immoral to ask any American this kind of question,” Pete told the House Un-American Activities Committee (HUAC) witch-hunters. He said he would be glad to sing any of his songs for the committee, but they refused. Pete went on to lament, “I am sorry you are not interested in the song. It is a good song.”

It was always a good song. Through the civil rights movement, where Pete’s role went far beyond his part in reimagining and popularizing “We Shall Overcome.” His Those Three Are on My Mind is perhaps the most powerfully evocative reminder of the assassination of civil rights workers James Chaney, Andrew Schwerner and Michael Goodman in Mississippi in 1964. From the earliest years of anti-war mobilizations, Pete kept our focus on The Big Muddy of Vietnam, as “the big fool said to push on.”

Pete was with us throughout the battles against the post-Vietnam wars, in Central America and apartheid South Africa, and all the wars in the Middle East. I spoke at rallies where Pete sang in 1990 and ’91, against Operation Desert Storm, George H. W. Bush’s war against Iraq. I remember once, during those years, a rally in upstate New York, not far from Pete and Toshi’s home in Beacon along their beloved Hudson River. I came backstage after speaking, Pete was tuning his banjo before heading out to sing. He was chatting with Toshi and friends who had joined him backstage — I didn’t think he had been listening to anyone else on stage. But he pulled me into his circle and said “that was really good — we need that kind of information.”

It was a very hard time — I think it was at that moment when we knew the war was imminent despite all our organizing efforts. While I was too star-struck to say much of anything, it was an extraordinary gift just to hear Pete’s acknowledgement.

Pete was with us in New York on February 15, 2003, when our global movement created the “second super-power” to challenge Bush’s war in Iraq. And he never lost his bearings at those moments of victory that bore within them the seeds of their own limitation or defeat, like the election of Barack Obama. He used every opportunity to push the envelope. Invited to sing at President Obama’s first inauguration, Pete included the usually-forbidden lines to his rendition of Woody Guthrie’s classic This Land is Your Land.

Beyond the summer camp anthem, he sang

Was a high wall there, that tried to stop me
A sign was painted there, said private property.
But on the other side, it didn’t say nothin’
That side was made for you and me.

What a gift that we had Pete with us all these years. He remains among the pantheon of our movements. And like Joe Hill, who charged his followers Don’t mourn, Organize! Pete left orders for us as well. In his 1958 To My Old Brown Earth Pete anticipated this moment, leaving a message for us all.

To my old brown earth
And to my old blue sky
I’ll now give these last few molecules of “I.”

Guard well our human chain,
Watch well you keep it strong,
As long as sun will shine.

And this our home,
Keep pure and sweet and green,
For now I’m yours
And you are also mine.

Go well, Pete. We’ll take up your songs from here.

Phyllis Bennis directs the New Internationalism Project at the Institute for Policy Studies. Her books include “Before & After: US Foreign Policy and the War on Terrorism.”
Distributed via OtherWords (OtherWords.org)