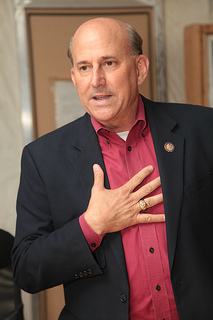 His recent musing about al-Qaeda operatives "acting Hispanic" to cross the U.S.-Mexican border landed him at the top of the heap.
By Jim Hightower | May 14, 2013

My state of Texas seems to have an inordinate share of nincompoops in public office. But it’s only fair that office holders from other states be considered before deciding which one is the nincompoopiest of all.

Give credit to Pennsylvania, for example, whose GOP governor, Tom Corbett, recently scored big nincompoop points by explaining why his state ranks 49th in job creation. “Many employers,” the guv grumbled during a radio interview, “say ‘we’re looking for people, but we can’t find anybody that has passed a drug test.'”

The old my-constituents-are-a-bunch-of-drug-addicts dodge? That’s world-class nincompoopery. Did I mention that Tom’s voter approval rating is down to 38 percent?

But compare Corbett to one of the Lone Star State’s congress critters, Steve Stockman. Steve’s re-election campaign has put out a bumper sticker with this uplifting thought: “If babies had guns, they wouldn’t be aborted.” Wow — that’s two nincompoopisms in only eight words!

Even Steve can’t hold a candle to Rep. Louie Gohmert another Texas Republican in the House. He’s the mouth that never shuts. Vice-chair of the House Subcommittee on Crime, Terrorism, Homeland Security, and Investigations, Gohmert recently revealed an astonishing piece of intelligence on the terrorist threat to the US of A. Al-Qaeda, he informed the world, has set up radical Islamist camps on the “other side” of the Texas-Mexico border. Really? No. But the Islamophobic alarmist proceeded to tell us that Mexican drug gangs are teaching al-Qaeda infidels how to cross the border into Texas, and they’re also being trained “to act like Hispanics.”

Hmmm, wondered many Latinos on “this side,” how does Louie think one would “act” Latino? Sing “La Cucaracha,” drive a low-rider, dress up as landscapers?

But “think” isn’t part of Gohmert’s schtick, which puts him atop the world of political nincompoops.