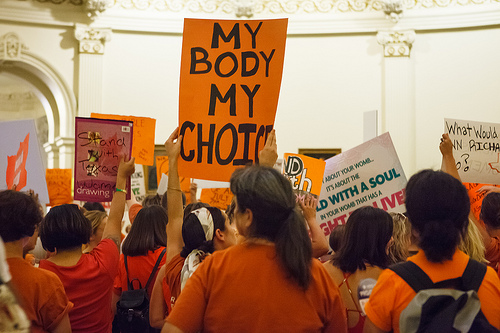 Despite the reproductive rights uprising inspired by Wendy Davis’ heroic filibuster, lame-duck Texas Governor Rick Perry has continued his anti-choice rampage. By signing a contentious measure into law, Perry has made it much more difficult for Texan women — particularly poor and rural women whose ability to travel is limited — to access safe and legal abortions.

Not only does the law ban abortions four weeks earlier than the standard set by Roe v. Wade, it also imposes arbitrary and expensive regulations on clinics, putting all but five of the state’s 42 abortion providers in danger of closing permanently.

Five. In the entire state of Texas, which is roughly the size of Florida, New York, Idaho, South Carolina, Maryland, Massachusetts, New Jersey, and Rhode Island combined. Home to roughly 13 million women,Texas may soon have only five clinics at which those women can get an abortion. 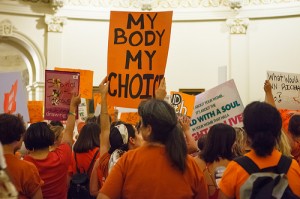 Legally, that is. Opponents of the bill have raised the concern that, if they can’t get to a clinic before the new deadline, Texan women will resort to black market or self-induced abortions, even resorting to taking pills sold at flea markets. The lives of Texan women are in more danger than before, thanks to a posse of supposedly “pro-life” Texan lawmakers led by Perry, whose 2012 presidential bid was the stuff comedians’ dreams are made of — fingers crossed for new stand-up material in 2016.

The new Texas law is bound to ruin — or end — the lives of women whose only crime was being born in Texas.

But conservative Texan state lawmakers aren’t satisfied with the damage they’ve already done. That new law looks like a memo from Planned Parenthood compared with what is effectively a total abortion ban Representative Phil King (R-TX) recently introduced in the Texas House.

This new proposition would ban all abortions, except in the case of immediate medical emergency, after the detection of a fetal heartbeat. That can happen as early as six weeks after fertilization.

Most women don’t even realize they’re pregnant that soon. Doctors often use the detection of a heartbeat to determine the very existence of a pregnancy. King’s House Bill 59 can’t be allowed to become law in Texas. The risk to women, and to their families, is too great.

The six-week ban has reared its ugly head before — a federal judge thankfully shut the whole thing down before it could go into effect in North Dakota. Judge Daniel Hovland denounced the ban as “an invalid and unconstitutional law,” based on the precedent set by Roe v. Wade. The law is against the anti-choice lobby on this ban. Hopefully, the same will hold true in the Lone Star State.

State Representative Harold Dutton, Jr. proposes an intriguing potential dam against the rising tide of anti-choice legislation. Dutton, a Democrat, introduced the Abortion Law Moratorium Bill, also known as House Bill 45, which presents so-called pro-lifers with a challenge: The state would have its draconian abortion restrictions, but only after it bans the death penalty.

If all life should be protected, the reasoning goes, the state has no business executing prisoners. If Texas is so “pro-life,” then why does it lead the nation in state-sponsored executions, with over 500 of them since 1976? More than half of those 500+ took place under the trigger-happy Perry.

Dutton’s bill isn’t going anywhere — he’s introduced it before with no luck. But the message he’s sending anti-choice legislators brings into sharp relief the cognitive dissonance of the phrase “pro-life,” which can be deadly for some women. And he’s laying bare the hypocrisy of being anti-choice and pro-death penalty.