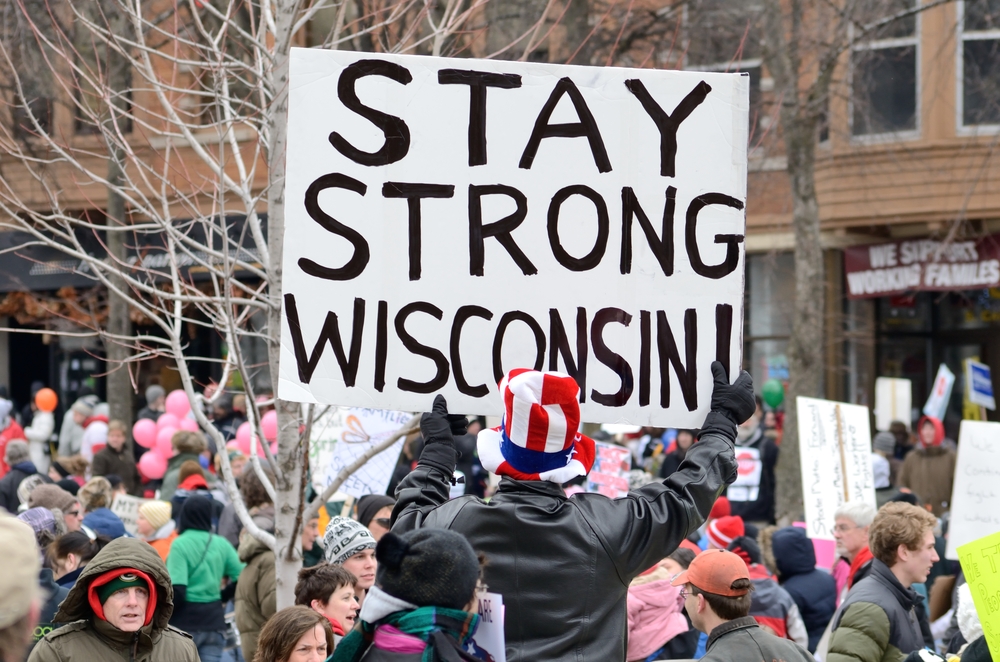 They’re trying to overturn the will of voters in Wisconsin, Michigan, and maybe a state near you.
By Jill Richardson | December 5, 2018

Wisconsin Republicans have made the news again. After losing the governor’s race (but maintaining control of the state legislature, thanks to gerrymandering), Republicans have passed a series of measures to limit the power of Democratic Governor-elect Tony Evers.

For those who have not been following Wisconsin state politics for the last decade, it’s worth a quick recap on the goings on in the Dairy State.

In 2011, Republican Governor Scott Walker and the Republican legislature gutted the power of public sector unions (including my union, the TAA, a union of graduate student workers at University of Wisconsin), resulting in the largest protests in the state since the Vietnam War.

As unions tend to support Democrats, and the union-gutting bill, Act 10, exempted the two unions that more often support Republicans (police and firefighters), the bill was clearly a partisan power grab by Republicans.

Wisconsin Republicans then passed a law requiring photo IDs for voting. I have a state-issued photo ID because I’m a student at University of Wisconsin, a state school. However, although college students are allowed to vote where they attend school, my school photo ID is not considered a valid ID for voting.

Requiring photo IDs to vote fixes a problem that does not exist. Voter fraud is incredibly rare.

What photo ID laws do very effectively is disenfranchise voters from demographics that mostly favor Democrats: the young, the poor, and people of color. That’s why my state-issued student ID wasn’t included as an acceptable form of ID under the law; college students are more likely to vote for Democrats.

Many analysts credit that law with suppressing enough votes to flip Wisconsin from blue to red in the 2016 presidential election.

Third, Wisconsin Republicans gerrymandered the districts within the state to favor their party and disadvantage Democrats.

A majority of Wisconsinites voted for Democrats but the majority will be represented by Republicans. Their votes simply didn’t count.

However, in statewide races like the governor’s race, Republicans couldn’t fall back on gerrymandering. Republican Scott Walker lost to Democrat Tony Evers. And that explains what they’re trying to pull now.

Wisconsin Republicans in the legislature just passed measures to limit the powers of Evers before he even takes office. They’re effectively reversing the will of the voters yet again.

Why should the majority of Americans who live outside Wisconsin care? Because these types of anti-democratic hijinks could be coming soon to a state near you. Or they already are, if you live in Michigan.

This isn’t a Democratic or Republican issue. This is an issue for all Americans who love democracy. Our system has rules that I think most of us believe are fair: The politicians (and party) that can convince more citizens to vote for them get to rule. If you want power, there’s a clear path to it in this country: appeal to voters and win elections fairly.

This is how we keep our government accountable to the people. When politicians can keep their jobs by fiddling with the rules and bypassing the need to win the support of voters, we fail to have a democracy. That is what is happening in Wisconsin and — so far — it’s been working.

We must stop this power grab from taking place, to protect our democracy for all citizens of all political persuasions.

OtherWords columnist Jill Richardson is pursuing a PhD in sociology at the University of Wisconsin-Madison. She now lives in San Diego. Distributed by OtherWords.org.