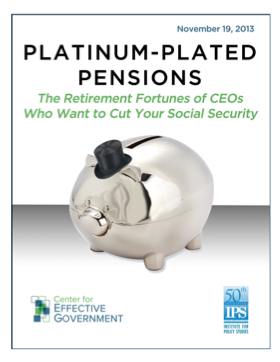 Many of America's CEOs don't think we're "entitled" to a secure retirement.
By Sam Pizzigati | November 27, 2013

Deck the halls, this holiday season, with scenes of hunger.

Struggling families all across America now have less food on their tables. Budget cuts that kicked into effect November 1 have lowered the nation’s average federal food stamp benefit to less than $1.40 per person per meal. 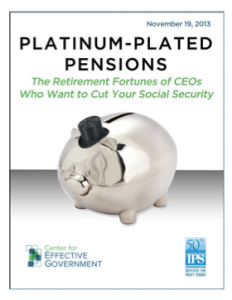 Austerity American-style is squeezing elsewhere as well, from Head Start for kids to Meals on Wheels for seniors, and more cuts are looming, as lawmakers on Capitol Hill near still another budget deliberation deadline, this one midway through December.

The next federal program in the crosshairs? Maybe the biggest of them all: Social Security.

Not too long ago, pensions also routinely delivered retirement security. But our corporations have cut back on traditional pensions. In 1980, 89 percent of Fortune 100 companies guaranteed workers a “defined benefit” at retirement. The rate last year: only 12 percent.

Companies have replaced traditional pensions with 401(k)s, and many firms don’t even match employee 401(k) contributions. The predictable result? The nation’s “retirement deficit” — the difference between what Americans have saved up for retirement and what they need to maintain their standard of living once retired — now totals $6.6 trillion, says Boston College’s Center for Retirement Research.

These corporate leaders — the nearly 200 CEOs who run the influential Business Roundtable and the over 135 chief execs who bankroll the lobby group known as “Fix the Debt” — seldom ever mention “Social Security benefits” and “cuts” in the same sentence. They speak instead in euphemisms. The nation, they intone, cannot afford the current level of “entitlement” spending.

These two changes, point out Sarah Anderson of the Institute for Policy Studies and Scott Klinger of the Center for Effective Government, would slice the average Social Security beneficiary’s lifetime benefits by about 20 percent.

America’s CEOs, Anderson and Klinger note in a new report, don’t need Social Security. They already have ample retirement security without it.

In fact, these CEOs are sitting on the biggest retirement bonanza in modern human history. The retirement accounts of Business Roundtable CEOs currently average $14.6 million, enough to pay out a $86,043 monthly benefit once they retire.

The typical American worker within 10 years of retirement, by contrast, now has only enough in saved-up personal retirement assets to generate a monthly retirement payout of just $71.

Why are so many CEOs driving so hard to cut Social Security? One reason: The corporations these CEOs run don’t pay much in the way of corporate taxes today. They want to pay even less — and the less the federal government spends on Social Security and other “entitlements” like Medicare, the less pressure on lawmakers to seriously tax corporate income.

CEOs also have a personal reason to want to see Social Security cut. Americans this year pay Social Security tax on only the first $113,700 of paycheck income. This tax ceiling rises each year with inflation.

But if we eliminated the ceiling entirely — and taxed the paychecks of CEOs and other high-income taxpayers at the same rate as the paychecks of average workers — 95 percent of the expected Social Security budget shortfall over the next 75 years would disappear.

America’s CEOs don’t particularly care for this sensible approach to fixing Social Security’s fiscal future. They’d much rather just ruin Social Security for the rest of us.