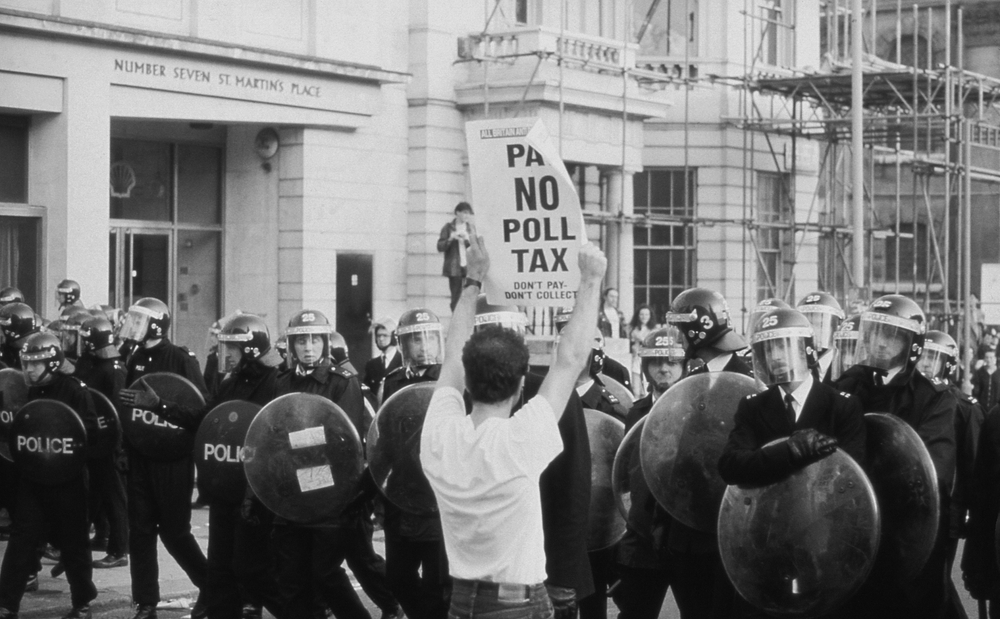 Anti-poll tax demonstrators confront police in London, 1990. A measure in Florida has been likened to a new poll tax. (Shutterstock)

Return of the Poll Tax

Florida's anti-democratic poll tax will cost the state hundreds of thousands of voters — and hundreds of millions of dollars.
By Robert P. Alvarez | July 10, 2019

DeSantis and the GOP-led Florida legislature recently made quick work of dismantling Amendment 4, a voter-approved ballot initiative that would’ve restored the right to vote to Floridians with felony convictions who’d completed their sentences (except those convicted of sex offenses or murder).

DeSantis’ new bill, SB 7066, subverts Amendment 4 by stipulating that people with felony records pay “all fines and fees” associated with their sentence prior to the restoration of their voting rights. This deliberately undercuts the outcome voters intended to secure when they passed the initiative with a supermajority.

Critics have charged that requiring payment to vote amounts to an unconstitutional poll tax. But alongside questions of the legality and morality of disenfranchising voters, there’s also a surprisingly large economic price tag to this dubiously constitutional scheme.

The Poor People’s Moral Budget, a report by the Institute for Policy Studies, cites new research by the Washington Economics Group (WEG) illustrating the cost of felony disenfranchisement in Florida.

As unbelievable as it sounds, they found that it costs Florida $365 million each year to deny civil and voting rights to returned citizens — money that could’ve been saved by fully implementing Amendment 4 as approved by voters.

How? For one thing, by reducing recidivism, which lowers the incarcerated population over time. This saves the state about $20,000 annually, per inmate, in correctional supervision costs alone.

In fact, WEG’s research found restoring the voting rights of returned citizens in Florida could reduce their recidivism rate by nearly 13 percent — good for most of the of savings taxpayers would see on court operating costs, correctional supervision, and capital expenditures for correctional facilities.

States with permanent felony disenfranchisement experience significantly higher recidivism rates than states with more lenient re-enfranchisement processes. As it turns out, allowing returned citizens to participate fully in society and in democracy reduces their likelihood of reoffending — and saves money.

An additional major boon for Florida would have been the increased earning power of returned citizens. This is attributable to two factors: decreased recidivism leading to a significant influx of returned citizens into Florida’s workforce, and the relationship between voting and income.

The first factor is straightforward — less recidivism over time equals more workers because fewer people are being sent back to prison.

Regarding the second factor, WEG argues that since voters tend to have higher incomes than non-voters, restoring the right to vote could increase the incomes of returned citizens. And with higher incomes, returned citizens “would be able to afford living in less-disadvantaged areas, which is associated with better employment outcomes after release, and less recidivism.”

Basically, being free allows you to get a job. Employment means you’ll have a higher income. And voter participation and family income show a clear positive association.

The economic impacts from both the reduced administrative costs and increased income of returned citizens, says WEG, would filter throughout Florida’s economy, yielding $365 million in total benefits.

That money could’ve created nearly 3,800 well-paying jobs, or been put to work serving the 51 percent of Floridians who are poor or low-income, the state’s 404,000 veterans earning under $35,000 a year, or the nearly 2.5 million Floridians without health insurance.

But that was before DeSantis and Florida Republicans wrung the people’s will out of the initiative, throwing away hundreds of millions of dollars and thousands of jobs, all to keep people from voting.

Moving funds away from the criminal justice system isn’t just the morally imperative thing to do. It’s also the fiscally responsible thing to do — something Republicans used to claim they cared about.

Robert P. Alvarez works in communications at the Institute for Policy Studies. He writes about criminal justice reform and voting. This op-ed was distributed by OtherWords.org.