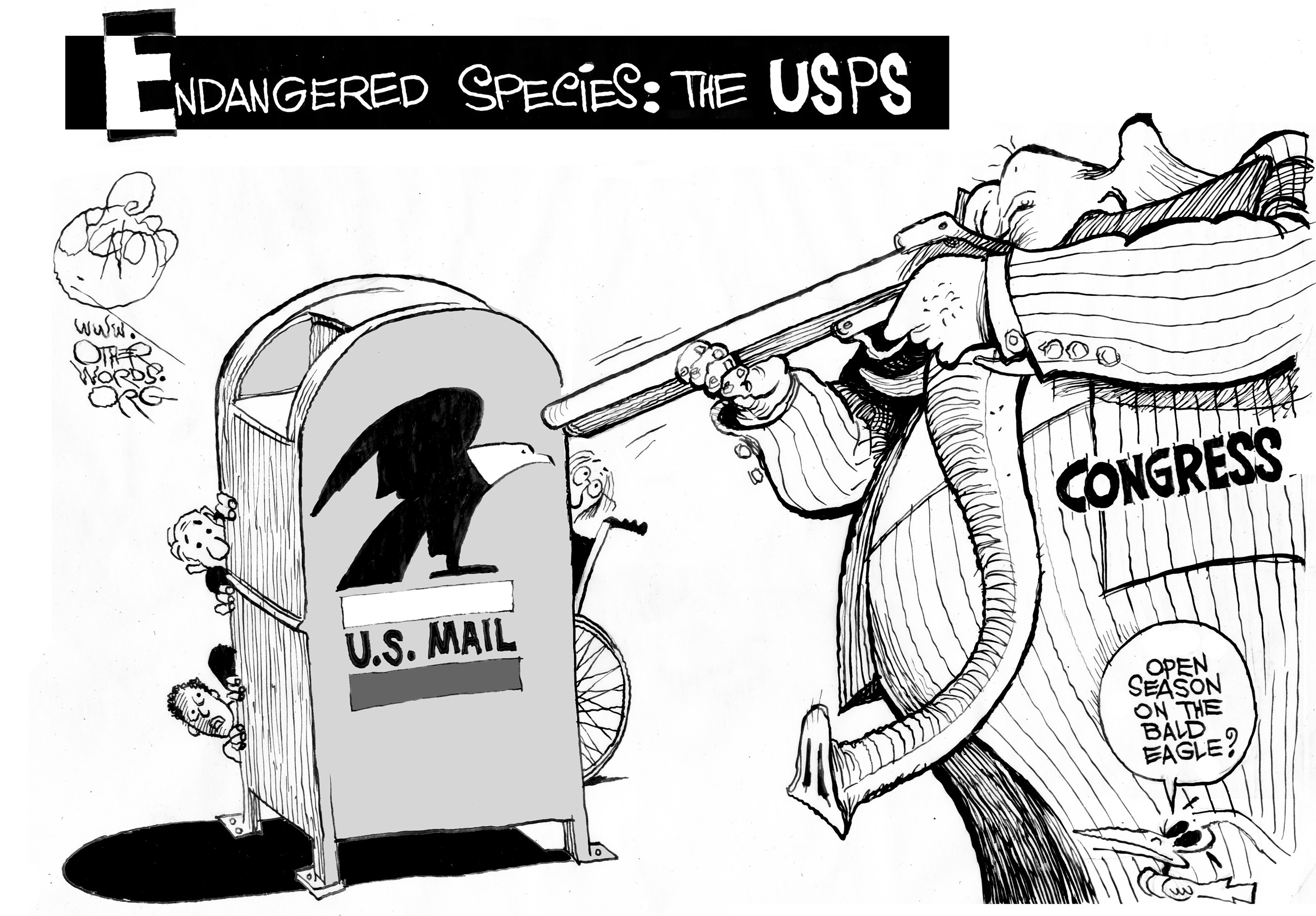 Shooting an Endangered Species, an OtherWords cartoon by Khalil Bendib

Saturday delivery is vital for the elderly, disabled, people in rural areas, and those who need medicine or equipment delivered to their doors.
By Fredric Rolando | March 13, 2013

Rooted in the Constitution and older than the country itself, the U.S. Postal Service supports 7.5 million private-sector jobs in the mailing industry. The Postal Service is essential to the fast-growing Internet sales industry. And the USPS is navigating this struggling economy relatively well, even making an operating profit in the most recent quarter.

So why all this talk about the Postal Service losing money? And why is Postmaster General Patrick Donahoe planning to end Saturday mail delivery? 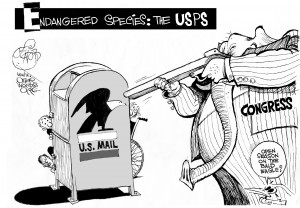 Shooting an Endangered Species, an OtherWords cartoon by Khalil Bendib

There’s no question the Postal Service faces big challenges. Both email and a struggling economy are dragging down mail volume. But the Postal Service’s financial problem is actually driven by Congress’s decision to “pre-fund” retiree health care costs. Beginning in 2007, the USPS has been required to pay 75 years of those costs in advance, and to do so within just ten years.

This pre-funding accounts for about 80 percent of the “losses” sustained by the Postal Service over the last six years that you’ve heard so much about. Indeed, that last quarterly profit was wiped out by a $1.4 billion pre-funding payment.

No other government agency or private company is required to pre-fund retiree healthcare. This isn’t the same thing as postal pensions, which should be, and are, pre-funded. Most businesses just pay retiree health care bills when they’re due, but the pre-funding law forces the USPS to pay these bills all at once, far in advance.

Any other company would use its available funds to modernize so it can stay healthy. The Postal Service should be taking advantage of the enormous growth in package delivery driven by Internet sales. Instead, because it must put every spare penny into pre-funding retiree healthcare, it’s stuck in crisis mode.

What’s more, the savings from dropping Saturday delivery would be much smaller than they appear. Cutting Saturday service will drive away some Monday-through-Friday customers too, such as magazine and newspaper publishers that may just switch to other delivery services for the entire week. A study by the Postal Regulatory Commission found that ending Saturday delivery would hurt the public and save significantly less than previous claims suggest.

Saturday delivery is particularly vital for the elderly, disabled, people in rural areas, and those who need medicine or equipment delivered to their doors. No other company provides universal delivery service to every address in the country, six days a week. Even private shippers such as FedEx and UPS use the U.S. Mail for up to a third of their final deliveries to customers’ doors because they can’t match the efficiency of the postal network.

Congress has required Saturday delivery by law for three decades. Instead of trying to defy Congress, Postmaster General Donahoe should urge lawmakers to fix the pre-funding problem and give the Postal Service room to adapt for the future.

Letter carriers aren’t waiting for Donahoe to figure this out. We’ll be out in full force across America on Sunday, March 24. At rallies in Mobile, Alabama, Bismarck, North Dakota, San Diego, California, and more than 100 other cities and towns, we’ll have a clear message for Congress — keep Saturday delivery, end the unnecessary pre-funding, and develop a real reform plan that gives the Postal Service the freedom to grow and innovate in the digital era.

For more information or to find a rally near you, please visit deliveringforamerica.com.

Fredric Rolando is president of the National Association of Letter Carriers, which represents nearly 300,000 letter carriers across the country. NALC.org
Distributed via OtherWords. OtherWords.org