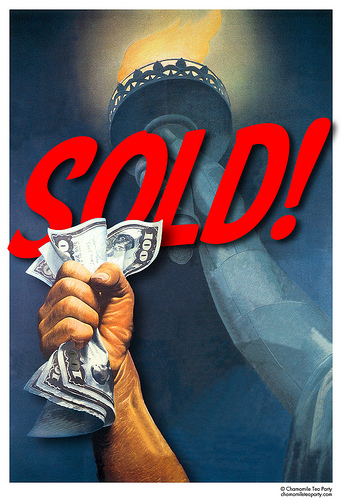 Corporations are funneling money to right-wing governors who work against the interests of their customers and employees.
By Jim Hightower | October 7, 2014

Some people have a recurring nightmare of rising to give a speech, but realizing they know nothing about the topic — and then discovering they’re naked.

It turns out that corporations also have such nightmares. OK, corporations aren’t people, no matter what the Supreme Court fabulists claim, so they can’t dream. But their top executives can, and several recently suffered the same chilling dream — only to discover that it was real.

These are chieftains of brand-name corporate giants who have secretly funneled millions of their shareholders’ dollars into the “dark money” vault of the Republican Governors Association. In turn, the group channels the political cash into the campaigns of assorted right-wing governors.

This underground pipeline is a dream come true for corporations. It lets them elect anti-consumer, anti-worker, anti-environment governors without having to let their customers know they’re doing it.

But — oops — in September, the group made a coding error in its database of dark-money donors, exposing the names of a mess of the GOP’s secret-money corporations. Suddenly, the chieftains were buck-naked in front of their customers, employees, and stockholders.

And all those folks were startled and angered to learn that the companies they supported were working against their interests. Here are some of the corporate dreamers that were pulling the wool over our eyes: Aetna, Aflac, Blue Cross, Coca-Cola, Comcast, ExxonMobil, Hewlett-Packard, Koch Industries, Microsoft, Novartis, Pfizer, Shell Oil, United Health, Verizon, Walgreen, and Wal-Mart.

Fred Wertheimer, a lifelong champion of campaign finance reform, noted that this boo-boo offers “a classic example of how corporations are trying to use secret money hidden from the American people, to buy influence, and how the (Republican) Governors Association is selling it.”