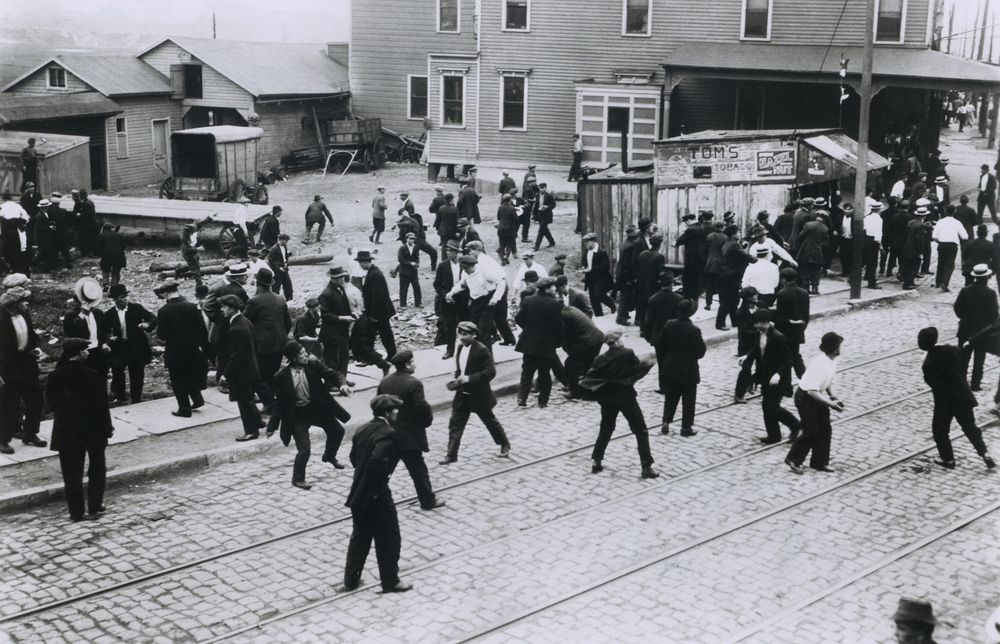 Riots Are as American as Apple Pie

Following the police killings of George Floyd and Breonna Taylor, national unrest has brought millions of protestors out from coast to coast. Most have been peaceful — but not all.

Cop cars and police precincts have been set ablaze, stores looted and vandalized, statues memorializing racists toppled. The police themselves have been repeatedly caught on video instigating violence and using military-grade weaponry against protesters.

Critics of the protests have focused entirely on the looting, often ignoring police brutality. They’ll tell people to protest more like Martin Luther King, Jr., perhaps forgetting that he called riots “the language of the unheard” — and that King himself was assassinated.

These complaints lack a basic understanding of American history. Historically, peaceful protests are rare. And as a political act, they’re fairly new.

Looking back at the early days of the American republic, riots, rebellions, and acts of insurrection — from the Whiskey Rebellion under George Washington to Fries’s Rebellion under John Adams — were so commonplace that the Insurrection Act of 1807 had to be passed to suppress them.

From 1800 to 1850, race riots between freed African Americans and new immigrants like the Irish were frequent. An estimated 250 slave revolts were suppressed by extreme force. Meanwhile white Americans also found time to riot over rent, taxes, and land disputes.

The next 50 years were no different. Anti-immigrant and anti-Catholic “Know-Nothing” riots cropped up from Baltimore to New Orleans in the 1850s, while the Colfax massacre in Louisiana saw 100 black men killed by a white militia in 1873.

The labor movement brought further clashes. Chicago’s historic Haymarket Square riots of 1886 called for the eight-hour workday, while the May Day riots of 1894 shook Cleveland over extremely high unemployment. Throughout the early 1900s, police clashed repeatedly with steelworkers, mineworkers, and other unionists.

Black Americans were terrorized by whites all the while, including in two of the most notorious race riots in history: Florida’s Rosewood massacre and the destruction of Tulsa’s Black Wall Street.

At the height of the civil rights movement in 1966, two-thirds of Americans had an unfavorable view of MLK in 1966. By the time he was assassinated, about 75 percent disapproved, according to a 1968 Harris Poll.

What followed? Riots. A wave of uprisings overtook 100 U.S. cities in wake of the slaying of King. But sometimes, riots work — these “Assassination Riots” in April 1968 led to the direct passage of the Civil Rights Act and Fair Housing Act.

The next year, a transformative LGBTQ civil rights movement began with the Stonewall Riot.

For a more recent example, former 49ers quarterback Colin Kaepernick attempted to resurrect an MLK-esque peaceful protest and was effectively blackballed from the NFL. The right ridiculed him and denounced his followers with extreme vitriol.

However, as the George Floyd protests unleashed a wave of anger, major cities announced plans to move funds out of their racist police departments. Other reforms followed, with Minneapolis even announcing plans to disband its police altogether.

But debating the effectiveness or morality of riot-like protests isn’t as important as examining who can riot historically and who can’t. White men achieved many political goals through rioting. And rioting by white sports fans is often less demonized than even peaceful protests by black and brown communities.

The real problem may be that some Americans don’t want marginalized people engaging in protests at all — “peaceful” or not.

Ricky Riley is an Atlanta-based journalist and educator. This op-ed was distributed by OtherWords.org.