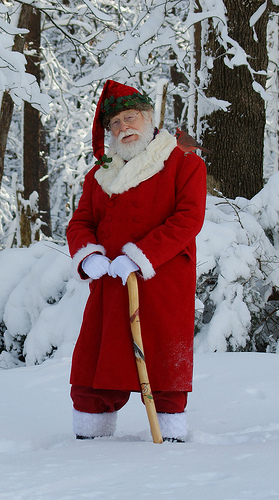 Santa’s Dreaming of a Green Christmas

From now on, naughty children will no longer receive coal in their stockings.
By Jill Richardson | December 11, 2013

Santa’s changing some policies at the North Pole.

You see, he’s concerned about global warming. If the polar ice caps melt, his workshop will sink into the Arctic Ocean. He’d become a climate refugee.

Droughts, floods, and storms are no good for farming. And pests lacking predators and diseases that are hard or impossible to treat are already moving into new areas in some parts of the world as a result of the changing climate.

Why does Santa care? He wants his milk and cookies, of course. The world’s favorite fat man won’t look half as jolly if he loses weight due to global food shortages.

And what happens if the North Pole is no longer a hospitable climate for reindeer? That just wouldn’t do.

That’s why, from now on, naughty children will no longer receive coal in their stockings.

Coal, says Santa, is a form of dirty energy. Referencing the Climate Reality Project, he notes that it is the dirtiest form of energy around. In 2011, coal accounted for 45 percent of energy-related carbon dioxide emissions — more than either oil or natural gas. And it’s bad for your health.

So how about “clean coal”? Let me quote from Santa’s press release about his new policies: “So-called clean coal is a desperate marketing ploy by the coal industry. It’s more imaginary than the Easter Bunny and the Tooth Fairy put together.”

For the record, Santa maintains that he’s real, and would appreciate it if you would stop lumping him with those two imaginary characters.

Beginning this Christmas, bad boys and girls will receive lame Christmas gifts like toothbrushes and underwear instead of coal. And not the fun kind with cute cartoon characters.

But, Santa adds, the amount of coal he historically dumped in stockings comprised just 0.01 percent of global coal consumption. After all, most children shape up their behavior around the holidays enough to at least get some presents.

That means that Santa’s policy change is, at most, symbolic. He asks us to join him in reducing our carbon emissions this holiday season and beyond in order to save his home.

For a start, consider getting a live Christmas tree with a root ball, then planting it after the holidays. Or instead of decorating the traditional fir or spruce, why not get a fruit tree and plant it after the ground thaws in the spring?

In cold weather, you can easily reduce energy consumption if you don a sweater instead of turning up the heat. You’ll make a bigger difference and save more money by improving your home’s insulation. A cheaper short-term fix is a water heater blanket. It will reduce the amount of energy spent heating your hot water.

As for gifts, Santa asks us to consider the amount of packaging, bags, and wrapping we use, only to throw it all away on Christmas morning. He’s asking us to consider buying used items instead of new ones. Gifts should symbolize love, he points out, and often the most loving presents are the kind that require your own time and effort — not store-bought or Internet-ordered goods.

Last, Saint Nick wants us to think about the energy our Christmas lights consume. Putting them on timers or opting for energy-efficient LED bulbs would save energy and make his eyes twinkle a bit more brightly.

What do you say? This holiday season, please help ensure that Santa won’t become the world’s most famous climate refugee by taking stock of your energy use and making changes where you can.