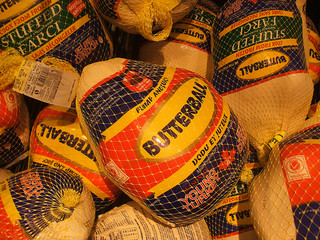 It’s odd that the most iconic feature of Thanksgiving — the turkey — is likely the most unnatural. It’s got competition, of course, from the jellied cranberry sauce that retains the shape of its can and various food products sold in boxes marked “Just Add Water.”

(Really, is it so hard to mash potatoes yourself, especially given their divine taste and creamy texture after you’ve added in all the cream and butter required?)

But it’s the turkey that takes the cake. Not that most of us would know that, since the last time most of us met a turkey was in a sandwich, not on a farm.

Despite the foreign-sounding name, turkey is a uniquely American food. American as in The Americas, and not just the United States. The large fowl was first domesticated in Mexico, after all, not Turkey.

Before those domesticated turkeys reached the iconic site of the first Thanksgiving, they were first imported to Europe, and then brought back to New England. Prior to that, the land we now call our country was only home to wild turkeys. Not that the Pilgrims didn’t eat them whenever they could catch one.

But turkey somehow remained a mostly American food despite its introduction to Europe. During a summer I spent in England when I was in college, turkey was one of the American foods I missed the most. Brownies were the other.

But American or not, today’s turkey ain’t what the Pilgrims ate. It’s not even what your grandparents ate at their Thanksgiving table.

For starters, today’s turkeys can’t even mate. That gives way to the ultimate joke, of course, that the only way to get turkeys to breed is with…wait for it…a turkey baster (ba dum dum).

From domestication, turkey breeding continued along a certain trajectory, creating a turkey with maximal breast meat, fast growth, and extreme “feed efficiency” — meaning that the birds gain as much weight as possible per pound of feed they eat.

The result is, predictably, a fast-growing, heavy-breasted bird that produces a hefty carcass. But while alive, these birds can hardly survive in nature or captivity. And they can’t carry out the most essential task of life for all species: reproduction.

What’s the alternative? Frank Reese, Jr., a farmer famous for his turkeys, notes the difference between his slow-growing “heritage” breed turkeys and the commercial breed most Americans eat on Thanksgiving. His birds are higher in protein, lower in fat, and they beat the commercial birds on flavor when compared by professional taste testers.

At the slaughterhouse, more differences show up. Commercial birds reach the end of their short lives with bone fractures and open sores, whereas Reese’s don’t. This is why half of the turkeys pardoned by the President don’t survive to celebrate a second Thanksgiving.

As an experiment, Reese once tried raising commercial breed turkeys in the same way he raises heritage breeds. As he put it, “They wanted to be turkeys and do the things that turkeys do, but they couldn’t. They physically couldn’t.”

The other differences between heritage and commercial turkeys are size and price. Most heritage breeds are smaller than a Butterball, and they cost upwards of $4 per pound. Compare that to the enormous, flavorless bird you’ll find on sale for practically nothing at most supermarkets this time of year.

Is it worth it to you to splurge once or twice a year on this most American of foods?

I think so. Choosing a heritage breed turkey for Thanksgiving is better for the turkeys, the farmers, the environment, your health — and your taste buds.