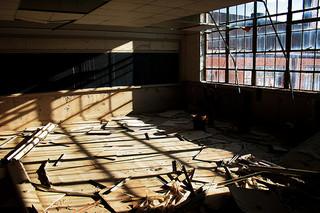 School segregation by class is the norm in the United States.
By William A. Collins | March 26, 2012

If our schools
Are in the tank;
We just have
Ourselves to thank.

Many American kids are getting a fine education these days, but plenty more are stuck with lousy schools. This disparity shouldn’t come as a shock, because that’s the way our society is designed.

Given that nearly half of public-school funding is derived from local property tax revenue, rich kids attend good schools while poor kids get stuck with struggling schools. Middle-class children often go to mediocre schools, but since the middle class is now shrinking so speedily, their schools are headed down a slippery slope.

All this is scarcely secret; we just don’t talk about it. School segregation by class is the norm. Here in Connecticut, one of the richest states in the country, there are many pockets of poverty. Our schools tend to be segregated by income. This is such an entrenched custom that any governor who proposed a sea change would soon go the way of Hosni Mubarak. 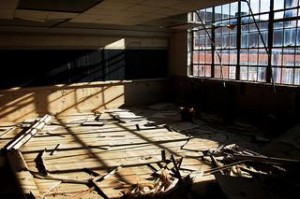 On the other hand, the elite have deemed it moral and fair to undertake token improvements to beef up the bad schools. President George W. Bush, who promised to be the “education president,” took a crack at this. In classic conservative fashion, he sought scapegoats. Not surprisingly, since they’re unionized, these were the teachers.

And yes, some teachers, like some presidents, are turkeys. But unlike presidents, they aren’t the crux of the problem. Poverty and segregation are.

It’s a tough issue politically. Reducing poverty will probably require higher taxes on the rich, and that’s easier said than done. America has a whole political party primarily devoted to lowering taxes on the wealthy. Its hapless frontrunner in the bitter presidential primary race is Mitt Romney, who pulled himself up by his bootstraps as the underprivileged son of a man who served both as president of American Motors Corp. and Michigan’s governor.

The many programs that comprise our fraying safety net do more for education than any standardized test, but they’re expensive. Food stamps, subsidized housing, and prenatal care are all surely a great boon to school performance, as are living wage laws and the State Children’s Health Insurance Program.

As long as taxpayers and politicians remain unwilling to pay the freight to provide a decent economic and educational foundation for poor kids, don’t get your hopes up for better schools. We won’t even pay higher salaries to keep good teachers in the poorest schools. Instead, they earn lower salaries, guaranteeing that the best ones will flee to the suburbs.

“School choice” is now a hot concept. Charter schools, magnet schools, private and parochial schools, and home schooling can all potentially enable kids to opt out of a school in which they aren’t learning. Sometimes, these alternatives work.

After years of attacks on the public school system, educational disparity in America continues to grow alongside economic disparity. It shouldn’t be every kid for himself or herself.