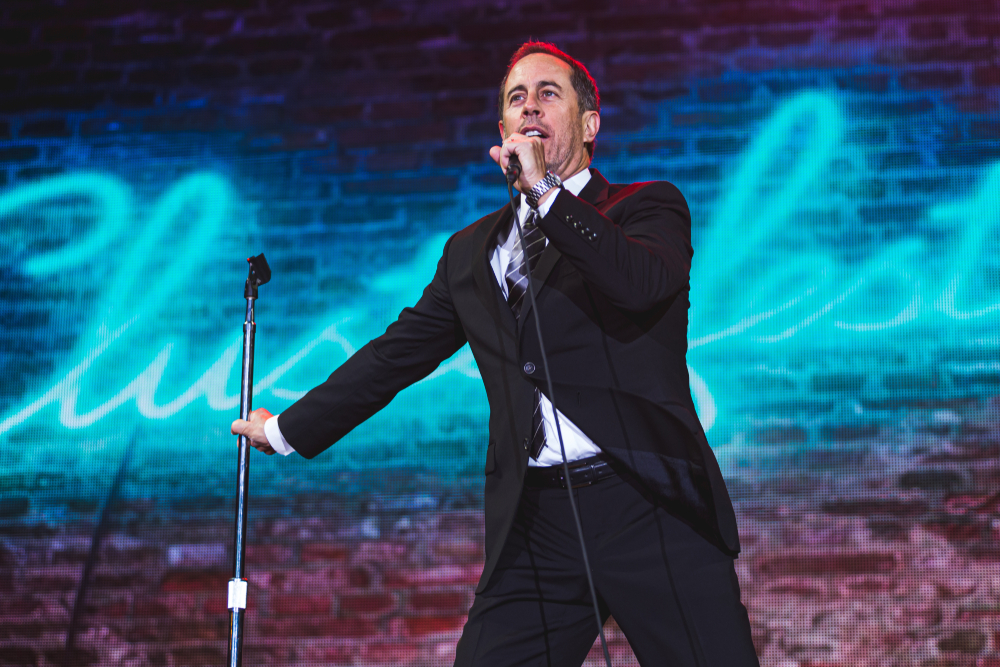 Judging by his latest Netflix special, maybe Jerry Seinfeld should try couples counseling instead of standup.
By Jill Richardson | May 13, 2020

If you want to see some mild misogyny disguised as jokes, I recommend Jerry Seinfeld’s new standup special on Netflix “23 Hours to Kill.”

In addition to giving us an observational Seinfeldian take on smartphones, he shares his point of view on heterosexual marriage. His point of view is that women are irrational, overly emotional, nagging shrews, and the men who marry them are unfairly henpecked.

Maybe Seinfeld’s speaking about his own marriage, but he universalizes it to a theoretical straight, male audience by addressing the men as “you” and talking about “women.” Not just one woman, or specific women, but all of us. He sarcastically makes fun of feminism (“girl power!”).

Frankly, as standup comedy, this take on the subject matter is old news. Comic Kermit Apio has already joked about his wife getting mad at him for something he did in her dream. Andy Woodhull also tells jokes about his wife being frustratingly irrational.

I think Apio and Woodhull are hilarious, and I loved Seinfeld’s show in the ‘90s. But Seinfeld’s take on women is old — and damaging.

Here’s another way to think of it.

Sociologist Arlie Hochschild found that in heterosexual couples with young children where both parents work outside the home, the majority of “the second shift” (cooking, cleaning, and childcare) falls on women.

What’s more, women tend to do jobs that are time-sensitive like cooking dinner, whereas men are more likely to do jobs that can be scheduled for a convenient day and time, like mowing the lawn. When men contribute to household labor, their work is often framed as “helping out” their wives.

Sociologist Allison Daminger found women were more likely than men to constantly monitor the household’s needs — when the kids are due for teeth cleanings, how much milk is left in the fridge — and identify needs and research solutions to them. Men’s contributions tend to be in the area of decision making, which the couple often does together.

Because the woman is constantly identifying what needs to be done and ensuring that it is done, she takes on the role of a manager of the household. Men often do tasks when their wives ask them to, but it’s up to the woman to keep tabs on everything and delegate the work.

Additionally, straight women expect men to be emotionally stunted, and they accept it when they are — but it still harms straight relationships. Men are told from a young age that it’s not “manly” to have emotions other than anger or to have close male friends. Then women have to do most of the emotional labor in the relationship.

When women express frustration with their husband’s inability or refusal to be equal partners in the household and the relationship, men can easily dismiss what their wives say by saying “women are so irrational.”

Which is what Seinfeld does in his new special.

Comparing marriage to a game show, he says, “The husband, of course, never has a clue. ‘I’m sorry, sir, you did not win the weekend sex package or the guilt-free televised sporting event. Thank you for playing. Are you even listening to me? And don’t forget to take that big bag of garbage on your way out of the studio.’”

Hochschild pointed out decades ago that second wave feminism stalled because women advanced in the workplace, but men refused to advance gender equality by meeting women halfway at home.

Dismissing and ridiculing your wife as irrational adds to a toxic household dynamic instead of resolving it. Maybe Seinfeld should try couples counseling instead of standup. And we should raise boys to feel all of their feelings and to expect to perform household labor as men.