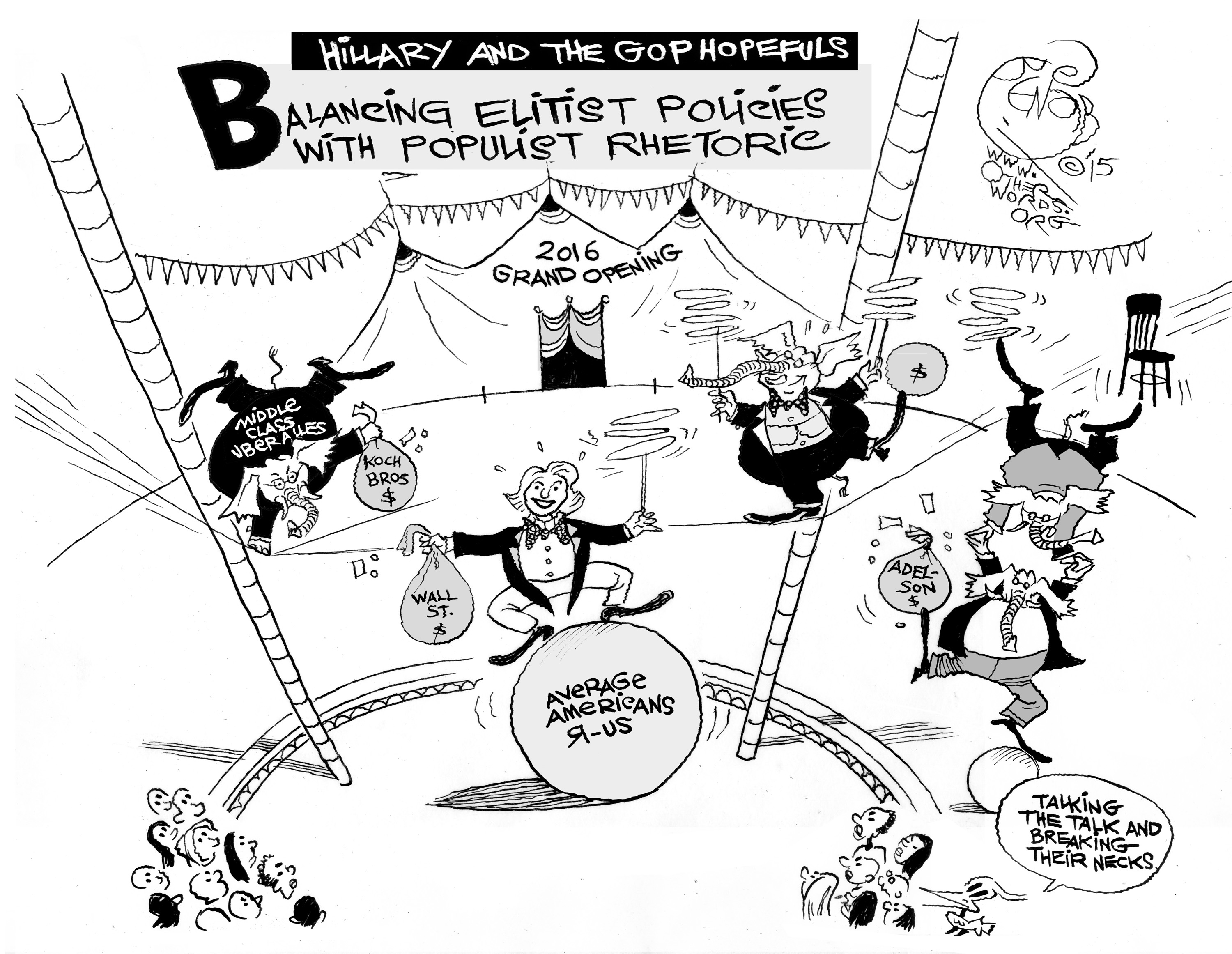 Walking the Presidential Tightrope, an OtherWords Cartoon by Khalil Bendib

Send in the Clowns

As the 2016 presidential candidates belatedly get worked up about inequality, they're losing touch with reality.
By Donald Kaul | May 13, 2015

Hardly a day goes by that another candidate doesn’t announce his or her intention to run for the presidency. One day it’s Carly Fiorina, the next it’s Mike Huckabee, Bernie Sanders, or Hillary Clinton, even.

It’s like the circus — when the little car rolls into the center ring and a clown gets out, then another, then two more, and on and on until the ring is overflowing with 1,000 clowns, or so it seems.

We won’t get up to 1,000 politicians yearning to lead the “free world,” or what’s left of it. But we should reach two dozen presidential aspirants who are asking us voters to take them seriously before we’re done.

It’s still early, but it looks as though the major message of this election is going to be about closing the cavernous gaps between the rich and the poor. Democrats have always suspected that the poor are being victimized by our economic system, but now it seems that the Republicans are singing that song too.

Former First Brother Jeb Bush, whose family has been rich ever since his grandfathers got into oil and weapons 100 years ago, is now excoriating the “elites” who’ve stifled growth and left the middle class to twist slowly in the wind. 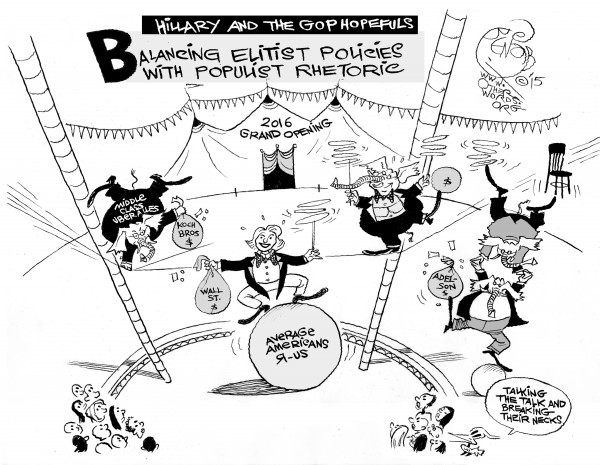 Walking the Presidential Tightrope, an OtherWords Cartoon by Khalil Bendib

Marco Rubio, the Florida senator who wants to raise the sales taxes that weigh most heavily on poor people, now urges us not to forget those same people — the workers who do our society’s grunt work. He’s also quick to remind us that he’s the son of a bartender and a maid.

Ted Cruz, leader of the Senate’s loudmouth caucus, does Rubio one better. His parents, he says, were both drunks. How’s that for humble beginnings?

Who else complains with a straight face that “the deck is still stacked in favor of those on top” while she’s busy setting up a super PAC that she hopes will raise $100 million for her campaign by July?

Bill Clinton isn’t much help either. Asked whether he’ll continue to make his six-figure speeches to fat cats while his wife runs for president, he said he’d have to.

“Got to pay our bills,” he said. Some bills.

Fiorina, who got a $21 million severance package when she was fired as head of Hewlett-Packard, is determined to protect workers from minimum-wage raises, which she says hurt folks hunting for entry-level jobs.

Wisconsin Governor Scott Walker, a pastor’s son, wants to protect workers from unions, in the name of defending the middle class. And Ben Carson, an African-American neurosurgeon, thinks that the Affordable Care Act is the worst thing since slavery.

Not all the goofballs are running for president — or married to someone who is — yet.

Do you know that there’s a sizeable faction in Texas that thinks U.S. Army exercises over there are prep work for the declaration of martial law and the confiscation of all weapons? Governor Greg Abbott actually tried to deploy the Texas Guard to ensure that wouldn’t happen.

What’s happened to this country? It used to be a fairly sensible place.

Maybe it’s time to send in the clowns.