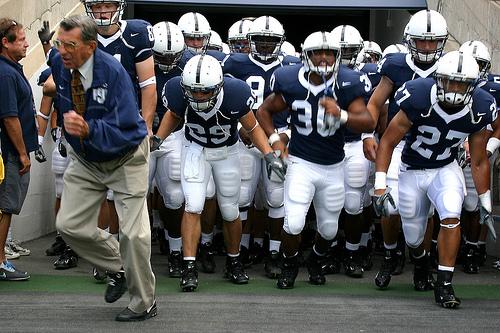 Walmart's sales are down because people are skimping on things like milk and food while Saks Fifth Avenue is selling lots of $1,000 handbags and $2,000 suits.
By Donald Kaul | November 28, 2011

In the spirit of the holiday season I have a gift for you: a freshly minted Herman Cain joke.

Q: Mr. Cain, what about Libya?

A: I never laid a hand on her.

But life isn’t all jokes and foolishness. It just seems that way when you’re dealing with politics. There are serious issues to be addressed — college football, for example. 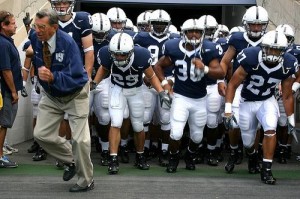 The grimmest college scandal in memory has erupted at Penn State, a quiet university deep in the Pennsylvania mountains, dedicated to academic excellence and watching football.

One of its most widely respected football figures — a retired assistant coach of national reputation — has been persuasively accused of being a serial pedophile who used his access to the university and its athletic department to enhance the practice of his perversion.

Worse yet, the entire hierarchy of the school — from head coach to athletic director to president — seems to have turned a blind eye to the situation. For years.

Which would be bad enough if it happened at just any football-first-and-everything-else-be-damned school (of which there are many), but Penn State has long been considered the gold standard of football integrity. It was big-time football the way it should be. Its ancient coach, Joe Paterno, was without rival when it came to reputation.

Now the president, the athletic director, and Paterno have been fired, and Paterno’s name has been taken off the trophy awarded to conference champions — the football equivalent of being brought before the troops at dress parade and having the epaulets and brass buttons ripped from your uniform.

Not many things shock me anymore, but I confess to being shocked at the Penn State scandal.

On another front, I’m not so much shocked as disappointed at the number of people who don’t have a clue when it comes to Occupy Wall Street and the rest of the Occupy movement.

Talking heads and editorial writers have looked disapprovingly at the (mostly) young people setting up camp in financial districts around the nation and asked, “What do they want?” Or even, without irony, “Why don’t they get a job?”

And that’s the point, isn’t it? There are no jobs; not the kind the protesters have gone to college and trained for.

Times are hard for new graduates these days. I doubt that their future has been this bleak since the Great Depression. On average, they graduate more than $25,000 in hock, often facing bleak job prospects. Then they look at Wall Street and the big banks and see the very people who gamed this economy into disaster still making millions of dollars a year playing the same games and complaining about taxes.

Walmart sales are down because people are skimping on things like milk and meat. At the same time, Saks Fifth Avenue is selling lots of $1,000 handbags and $2,000 suits.

What do they want, the protesters? They want justice, for openers. They want the kind of society they were promised, one that gives people an equal chance at success if they’re willing to work for it.

They don’t want a society where the top 1 percent of the population commands more than one-fifth of the nation’s income and more of than 35 pecent of its wealth, a society ruled by a corporate elite whose only religion is greed.

They don’t want a society where in tough times the only people asked to make sacrifices are the old, the young, and the poor.

More than anything, they want their future back.

It’s not a lot to ask, actually, not if we really are the exceptional nation we pretend to be.