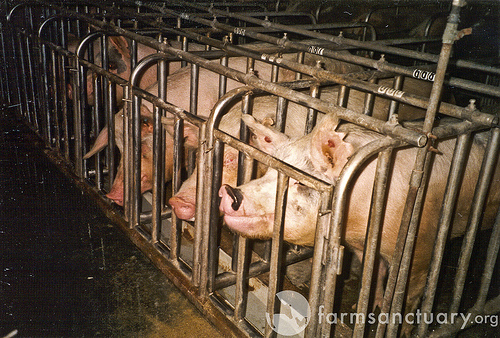 Rising prices aren't the only reason you should reconsider eating pork.
By Andrew Carter | July 23, 2014

A pound of bacon now costs more than $6. That’s a record increase from $3.86 a pound four years ago.

Blame Porcine Epidemic Diarrhea virus. The disease, known as PEDv, is rattling the pork industry after claiming over 10 percent of the U.S. pig population. Nearly all infected piglets suffer severe dehydration and die within the first few weeks of their life. 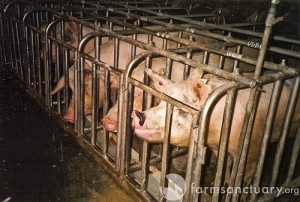 The cause of the virus is still up for debate, but many farmers suspect contaminated feed imported from China. Pork prices have shot up over 12 percent since May and relief could be more than a year away.

Though the illness doesn’t threaten human health, there are other reasons to cut back on pork.

Ever since the outbreak began in 2013, farmers have been scrambling to find some kind of solution. One farm in Owensboro, Kentucky, fittingly named Iron Maiden after the medieval torture device, made headlines earlier this year for resorting to a stomach-churning concoction dubbed the “piglet smoothie.”

The Humane Society brought this supposed treatment to light during an undercover investigation. Also called “feedback” or “controlled exposure,” it involves liquefying the guts of dead baby pigs and feeding them to pregnant sows in the hopes of stimulating immunity. Of course, these sows were probably the piglets’ own mothers.

Industrialized, force-fed pig cannibalism may sound like a radical and desperate measure. Yet it hasn’t prevented farms from using this method in the past to combat livestock diseases. Unsanitary feeding conditions on factory farms are pretty common and cattle are sometimes fed chicken litter — which can contain traces of ground-up bone meal from beef.

The USDA just authorized a new vaccine to fight the epidemic which could put an end to the piglet-pureeing market.

But revelations like this tell more than a sick story — they offer crucial insight into the countless, unseen cruelties taking place on factory farms every day.

In many states, it’s illegal to even try to expose this kind of abuse because of so-called “ag-gag” laws, which prohibit anyone from shooting videos or photos on farm property.

What else is the pork industry trying to hide?

Well, the Humane Society found pigs at Iron Maiden confined to gestation crates so small they were nearly immobilized. Given little more than inches to move their whole lives, their muscles quickly atrophied and they developed blisters all over their bodies. Other abuse included workers beating, punching, kicking, and hurling piglets against walls.

No state or federal agency has responded yet to Iron Maiden’s immoral practices with punitive actions and the farm is still fully operational, according to Paul Shapiro of the Humane Society. But last year at Wyoming Premium Farms, five employees pled guilty to multiple counts of animal cruelty following the exposure of similar abuses.

Now, not every factory farm in the United States is sadistic or brutal, though the chances you’re getting pork from a place like this might be higher than you think. Wyoming Premium turned out to be a supplier for Tyson Foods. After public outrage erupted, Tyson quickly cut ties.

A much-needed movement for better farm animal conditions is in its early stages. Many of the biggest food giants in the world, like Cargill, Subway, and Safeway, are beginning to condemn and phase out the use of gestation crates in their pork supply chains.

You might already be cutting back on pork due to rising prices. But as long as this kind of farm animal cruelty continues, it’s time to consider leaving it off your plate altogether.

Andrew Carter is an OtherWords intern at the Institute for Policy Studies, a recent graduate of Bloomsburg University, and a committed vegetarian.
Distributed via OtherWords.org