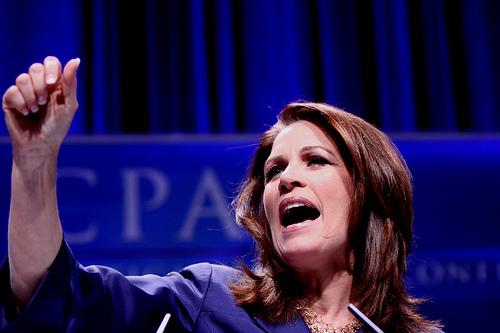 One well-rehearsed performance in a single debate shouldn't wipe out the memory of Michele Bachmann's long public career filled with absurd misstatements of fact and bizarre conspiracy theories.
By Donald Kaul | June 20, 2011

I recently wrote a column suggesting that my “lamestream media” colleagues give Michele Bachmann more love. As the most Republican of the Republican candidates, she deserved more attention, I said.

They took me seriously. In the recent New Hampshire GOP debate, she emerged as the star. Television networks, newspapers, and blogs all agreed that she had handled herself well and since then have given her the respect accorded a serious candidate.

The thing is, I was just kidding. It was a joke, an ironic statement on how loopy the Republican Party has become.

It’s too late to apologize, I suppose. The damage is done.

She’s now all the rage and is being listed near the top of the GOP hopeful list.

However, in the spirit of tardily locking the barn door, let me make this clear once and for all:

Bachmann isn’t a serious presidential candidate. Despite winning three elections for her seat in Congress, she wouldn’t be a serious candidate for homeroom teacher. She could be a serious tarot card club manager, maybe — that’s it.

Has our media gone completely mad? Has it let one well-rehearsed performance in a single debate wipe out the memory of a long public career filled with absurd misstatements of fact and bizarre conspiracy theories that cross over into the Twilight Zone?

Have we forgotten who Bachmann is? Already? Here are a few of her choicer thoughts:

She has also said that President Franklin D. Roosevelt started the Depression by passing the “Hoot-Smalley” Act (Herbert Hoover signed the Republican-sponsored Smoot-Hawley Tariff Act in 1930, two years before FDR was elected), that the American Revolution started in New Hampshire (it was Massachusetts), that Jimmy Carter was responsible for the 1973 swine flu epidemic (during Gerald Ford’s administration), and that our Founding Fathers were the generation that ended slavery (that would be the Civil War generation). She also warned that middle school field trips to Planned Parenthood facilities could result in quickie abortions for 13-year-olds.

That’s not a serious presidential candidate. That’s “I Love Lucy.”

A month or two ago I wasn’t really worrying about her candidacy. I figured she was just another mildly entertaining GOP primary sideshow.

After seeing the rest of the Republican heavy hitters in action, however, I’m starting to worry.

GOP primary voters are going to be forced to choose among the Chameleons (Romney, Pawlenty) who will agree with any opinion shouted out from the audience; the “Look Ma, I’m Running for President” Bunch (Bachmann, Cain, Santorum); and the “I Can’t Believe a Smart Guy Like Me is Trapped With These Losers” Caucus (Gingrich, Paul).

Maybe in that company Bachmann will look reasonable. And maybe if the economy stays in the toilet, anybody can beat Obama in 2012.

Jon Huntsman announced his candidacy just after the debate. I don’t know much about him, but right now he looks like George Washington to me.