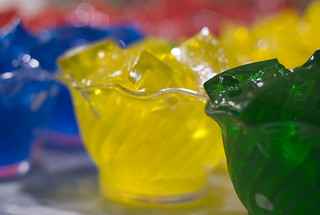 Even food manufacturers often don't know if nanoparticles are in the food they sell and no one knows if they're safe to eat.
By Jill Richardson | July 24, 2013

They’re found in M&Ms, Dunkin’ Donuts, Jell-O pudding, and even Pop-Tarts. Scientists don’t know if they’re safe to eat. The government doesn’t regulate these things. Even food manufacturers often don’t know this technology is in the food they sell. You probably don’t either.

Nanoparticles are particles so tiny they must be measured in nanometers — one billionth of a meter. If a nanoparticle were the size of a football, then a red blood cell would be the size of the field. They’re at the heart of a new $20 billion business.

The most important thing to know about this emerging technology is that size matters. Common materials like silver or titanium dioxide take on new properties when they’re shrunk to tiny proportions.

Non-stinky socks certainly sound nice. But is nanosilver safe? Silver is a common, safe metal, but nanoparticles are small enough that they can go places that larger molecules can’t. For example, they can cross the blood-brain barrier. Just because a chemical is safe, that doesn’t mean it’s safe in a teensy, nano form.

Early research into commonly used nanoparticles, like silver and titanium dioxide, raises concerns. The group As You Sow points out that nanoparticles can penetrate cells and interfere with cellular functions. And yet, the National Nanotechnology Initiative spent more than 16 times more on product development than on safety testing in the last three years.

So how about those nanoparticles in your food?

As You Sow followed up by testing powdered sugar coated doughnuts from Dunkin’ Donuts and Hostess. Both had nano-sized titanium dioxide. This raises another question: Why do food manufacturers need to put a white pigment in powdered sugar? Isn’t it already white?

Here’s the point: Nanotechnology is here, and it’s already in our food.

And, unfortunately, nobody’s really on top of this newfangled stuff. Even though size matters in the real world, it doesn’t matter in our regulations. If a chemical is legal in food, then it’s legal in nano form. No labels needed!

Consumers already get tons of info about nutrition, trans fats, and allergens. We need to know what’s in our food, so our government makes companies tell us. But in the case of nanoparticles, sometimes food manufacturers don’t even know themselves when nano is in their products because it was placed in there by one of their suppliers.

Even when nanoparticles aren’t in what we eat, could they seep in from food packaging? Do the nanoparticles migrate from the packaging into the food? Nobody knows yet.

It’s all just one grand experiment, and we’re the guinea pigs.

If you want to avoid nanotechnology in your own body — at least until they’re proven safe for human consumption — your best bets are to buy organic food and avoid processed foods.

Even if they’re proven safe later on, it will be worth the effort. When you load up on fresh fruits and vegetables and skip the doughnuts and candy, you do your health a favor.

But for our society as a whole, leaving this up to individual responsibility is unacceptable, especially when consumers can’t even see these tiny particles to know which foods to avoid. An easy first step is labeling foods containing nanoparticles. Better yet, companies should not be allowed to put them in our food until they’re proven safe.

The federal government is holding a meeting this September to discuss the potential risks of nanotechnology and how to manage them. Until adequate safety testing is completed, let’s get nanoparticles out of our food.