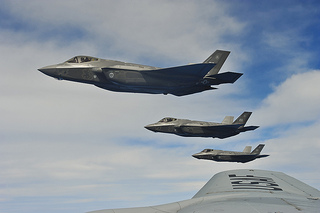 Our bloated military budget contributes significantly to our massive national debt and threatens the very security it’s intended to provide.

Several expensive and unnecessary military programs are behind this paradox. The Pentagon should cut them from its $640.5 billion budget with the full support, rather than the opposition, of Congress. Our long-term economic viability would benefit, along with our national security.

U.S. national security does depend on a powerful military with the ability to meet global threats whenever they may arise. For our service men and women to succeed, they require modern weaponry and equipment, along with adequate logistical and administrative support. These essential requirements aren’t cheap. Neither are the adequate salary and benefit packages necessary to attract talented volunteers to join our military services.

And the time has come for a smarter Pentagon budget. The deficit financing of two major wars in Iraq and Afghanistan, plus irresponsible increases in the military’s core budget, have created a mountain of debt that threatens the health of our economy.

Following the Great Recession, a National Intelligence Estimate concluded that the greatest threat to national security was not international terrorism but the ongoing economic downturn and the growing national debt. Our nation’s top military leaders also have voiced this concern. Then-Chairman of the Joint Chiefs of Staff, Admiral Mike Mullen, stated it clearly in 2010: “The most significant threat to our national security is our debt.”

One of the major drivers of the budget deficit and mounting long-term debt is the Pentagon budget. Recent military outlays amount to more than half of U.S. discretionary spending and this situation hasn’t changed much despite our withdrawal from Iraq and the drawdown from Afghanistan. Paradoxically, excessive spending for programs ostensibly designed to enhance U.S. national security actually weakens it.

A prominent example of excessive defense spending is the F-35 Joint Strike Fighter program. Over the course of its life, the program is projected to cost an estimated $1.5 trillion, the most expensive weapons system program in U.S. history. This program is wholly unnecessary, since the U.S. military has unquestioned air superiority over any potential enemy for the foreseeable future without procuring the F-35. Modifying aircraft currently in the inventory is a more sensible and far less costly alternative.

The U.S. Navy’s $120 billion Littoral Combat Ship was designed to conduct combat operations close to the shoreline. The first deliveries are extremely disappointing. A 2011 pentagon test and evaluation report concluded that these new ships not only lack adequate firepower but also even essential protection in that they are “not expected to be survivable in a hostile environment.”

Perhaps the most egregiously wasteful defense expenditure is the excessive budget for the entire nuclear weapons complex, estimated to cost $640 billion over the next decade. This includes expenditures for unnecessary infrastructure, nuclear warhead modernization, and new and expensive delivery systems at a time that we are reducing the role of nuclear weapons in our defense strategy.

Why? We certainly don’t require 1,500 deployed strategic nuclear weapons to deter our adversaries or reassure our allies and friends. Former Vice-Chairman of the Joint Chiefs of Staff, who served previously as U.S. Strategic Forces Commander, General James Cartwright, put it simply: “What is it we’re really trying to deter?”

Expensive aircraft, ships, and nuclear weapons offer minimal, even marginal, military capability against current security threats and those projected for the foreseeable future. They’re vestiges of a bygone Cold War; and their high costs are a major cause of our rising national debt that undermines the health of our economy that is the basis for the security of our nation.

Both the Pentagon and Congress must give more than lip service to the need to eliminate non-essential expenditures in light of our current and projected fiscal situation. Military spending that harms rather than enhances national security should be at the top of the list for necessary savings. We could save billions of dollars from an inflated military budget, thereby contributing to the stability of our economy and enhancing our national security.

Lt. General Robert Gard (USA, ret.) is the chairman of the Center for Arms Control and Non-Proliferation and former president of National Defense University.
Distributed via OtherWords (OtherWords.org)