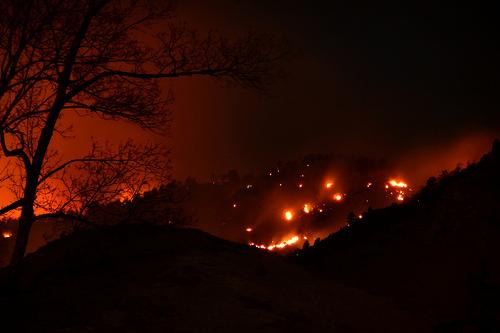 Colorado's wildfires and the record heat waves should sober up some climate change doubters.
By Saul Landau | July 30, 2012

“There is substantial evidence,” the former Republican presidential candidate told reporters, “that some of these fires have been caused by people who have crossed our border illegally.” 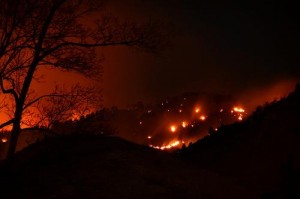 Other conservatives say equally outlandish things. “Belief in man-made global warming is a lot like believing in Santa Claus,” Rush Limbaugh asserted on his show.

“We’re seeing a window into what global warming really looks like. It looks like heat, it looks like fires, it looks like this kind of environmental disaster,” Oppenheimer told Reuters in late June as fires rampaged through Colorado. “This provides vivid images of what we can expect to see more of in the future.”

In other words, the fires in Colorado, Montana, Wyoming, New Mexico, Arizona, California, and Utah should sober up some of our climate change doubters.

Few of the now former homeowners in Colorado Springs will likely pay much attention to ardent deniers of global warming. They’ve felt higher seasonal temperatures and witnessed earlier spring melt. They’ve lived through the large wildfires and lengthening fire seasons that have ravaged the west coast over recent decades.

“The record-breaking fires this year in the Southwest and Rocky Mountain region are consistent with trends [of global warming],” wrote Kevin Trenberth, leader of the Climate Analysis Section at the National Center for Atmospheric Research, in a recent scientific review. Trenberth’s paper, co-authored with scientists Jerry Meehl, Jeff Masters, and Richard Sommerville, warns of an ever hotter — and out West, fire-ridden — world.

By late June, more than 32,000 people had evacuated Colorado Springs as fires wreaked havoc in the area. Flying over the city, Colorado Governor John Hickenlooper was stunned. “It was like looking at the worst movie set you could imagine,” he said. “It’s almost surreal.”

“Climate change is clearly playing a role,” said Trenberth. “There are wildfires all over the place.”

Just like Rush Limbaugh, I’m no scientist. But I trust my guts — and my eyes, which have seen countless fires, droughts, floods, hurricanes, tsunamis, melting ice sheets, and tornadoes all over the news.

How is it possible not to believe in climate change?