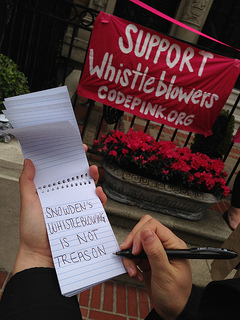 Corporate execs at firms like Booz Allen have a vested self-interest in pumping up demand for their snooping services.
By Sam Pizzigati | June 19, 2013

Many Americans clearly do find the idea of government agents snooping through their phone calls and emails a good bit unnerving. 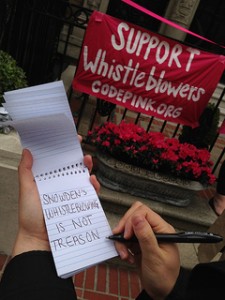 But Americans have more to worry about on the surveillance front than overzealous government agents. Government personnel aren’t actually doing the snooping Snowden revealed. NSA officials have contracted this work out — to private companies.

Surveillance contracts, in turn, are making a handful of corporate executives exceedingly rich. And none have profited personally more than the suits who run Booz Allen Hamilton and the private equity Carlyle Group.

Snowden did his snooping as a Booz Allen employee. Booz Allen, overall, has had tens of thousands of employees doing federal intelligence work.

But the real windfalls are flowing to the Carlyle Group, Booz Allen’s parent company. In 2011, Carlyle’s top three power suits shared a combined payday of over $400 million.

What do these billions have to do with our surveillance mess? Washington power players, from President Barack Obama on down, are insisting that the government’s expansive surveillance program has but one purpose: to keep Americans safe from terrorism.

But who can put much faith in these assurances when other motives — the financial kind — are so obviously at play? Corporate execs at firms like Booz Allen have a vested self-interest in pumping up demand for their snooping services.

In other words, this new unit will be figuring out how to get the federal government to pay up even more for investigating who we “like” on Facebook.

Corporate executives have, of course, been enriching themselves off government contracts for years. But post-9/11 political dynamics have turbocharged that process. America now sports, as analyst David Rohde has observed, a “secrecy industrial complex.”

Could Snowden’s revelations upset Corporate America’s long-running government contracting gravy train? Maybe, but only if anger over the revelations translates into real changes that keep private corporate contractors from getting rich off tax dollars.

What might these changes entail? We could take our cue from Hugo Black, the former U.S. Supreme Court justice. As a U.S. senator from Alabama in the early years of the Great Depression, Black proposed denying government contracts to corporations that overcompensated their top execs.

How might this approach work today? President Obama makes about 25 times the compensation of the lowest-paid federal employee. We could apply that ratio to all federal contracting and deny our tax dollars to companies that pay their top execs over 25 times what their workers make.

Protecting privacy in a dangerous world will never be easy. But we’ll never have even a shot at protecting privacy until we take the profit out of violating it. Ending windfalls for contractors would be the logical place to start.