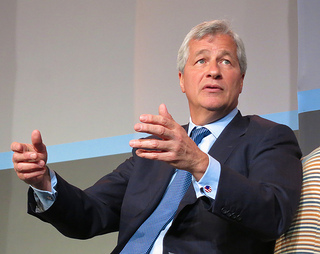 Socking it to the Shareholders

The government should go after the bankers at JPMorgan instead of making their shareholders foot the bill for billions in fines.
By Jim Hightower | October 1, 2013

Someone should make a movie about JPMorgan and title it: “Bankers Gone Wild.”

Not long ago, America’s biggest Wall Street Empire was hailed as a paragon of financial integrity. Not now. JPMorgan has been assessed record fines of nearly a billion bucks for management illegalities.

That’s just one example. The bank is being investigated for other crimes by seven federal agencies, several states, and two foreign nations. Reportedly, the settlement Attorney General Eric Holder and JPMorgan CEO Jamie Dimon recently discussed for these transgressions may total some $11 billion.

The $920 million punishment was levied in September because top-level mismanagement caused shareholders to lose a whopping $6 billion in a trade scandal last year, and because the CEO and other ranking executives tried to cover up the loss.

Media reports say the bank agreed to pay the fine to settle those charges, but therein lies yet another crime committed by the bankers gone wild — a crime sanctioned by the same regulators who made the charges. When it’s reported that “the bank” will pony up a billion dollars, who exactly is that?

Not the bankers who committed the illegalities, but Chase’s shareholders. Wow. The money the bankers lost belonged to shareholders, yet they’re being socked for another billion to cover the bankers’ fine. Imagine if you were burglarized, then were fined for that theft.

Federal regulators say it’s easier to get bankers to settle a case if they can hand the fine to shareholders, who don’t even get a say in the decision. But going after the bankers, they claim, would require a jury trial — and jurors might not convict.

Huh? What kind of pathetic justice is that? Besides, it’s ridiculous to think that jurors wouldn’t jump at the chance to convict Wall Street banksters. That’s a jury I’d like to serve on, wouldn’t you?