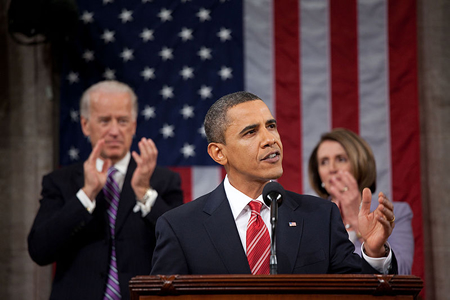 The State of Our Union’s Inequality

Obama should follow in FDR's footsteps and do something about the "overprivileged" as well as improving conditions for the poorest among us.
By Sarah Anderson | January 22, 2014

There’s no doubt that President Barack Obama will make inequality a major theme of his State of the Union address, just as Franklin Delano Roosevelt did in 1935.

“We have not weeded out the overprivileged and we have not effectively lifted up the underprivileged,” FDR lamented. “Both of these manifestations of injustice have retarded happiness.” 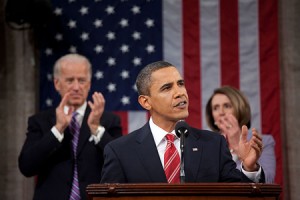 Like Roosevelt, Obama gets that the inequality problem has a top and a bottom. In a speech last December, he railed against the exploding gap between CEO and worker pay and the concentration of our nation’s wealth in the hands of a few.

When it comes to proposed actions, though, Obama is expected to focus exclusively on lifting up the bottom.

Don’t get me wrong. I’ll be cheering if Obama uses the State of the Union address to make a big pitch for raising the minimum wage. It’s shameful that in the richest country in the world there are so many people who work hard every day and still live in poverty.

But unless Obama also tackles the top end of the problem, he won’t do much to turn around the trend toward extreme inequality.

In his 1935 speech, FDR was careful to explain what he meant by “overprivileged.” He had no problem with some people earning more than others.

What he did have a problem with was “the acquisition of wealth which, through excessive profits, creates undue private power over private affairs and, to our misfortune, over public affairs as well.”

In other words, it ticked him off when those at the top rigged the rules in their favor.

It’s not hard to find examples of such “overprivilege” today. Most glaring, perhaps, are the Wall Street titans who made excessive profits from reckless financial activities that crashed the economy. While millions lost their jobs and homes, the titans used their undue power to walk away largely unscathed.

The 2010 Dodd-Frank financial reform legislation was supposed to prevent Wall Street pay packages that reward excessive risk-taking. More than three years since the law was enacted, however, these modest reforms have not been implemented.

Then there are the overprivileged who hire hotshot lawyers to help them avoid their fair share of taxes. Mitt Romney’s Cayman Islands accounts were a prime example of the kind of tax dodging that costs the rest of us an estimated $100 billion per year. Unfortunately, the Obama administration has backed off tough tax haven proposals.

These are just two areas where the president could be doing a lot more to weed out the overprivileged. Of course when he faces the current Congress, he’ll see fewer friendly faces than FDR did in 1935, when Democrats had strong majorities in both houses.

And yet Obama shouldn’t give up trying to build support across party lines on these issues. A new Gallup poll shows that 54 percent of Republicans are dissatisfied with current levels of U.S. income and wealth distribution. Small business owners, who are more likely to be Republicans than Democrats, overwhelmingly oppose loopholes that allow big businesses to use offshore accounts to avoid paying their taxes.

Even most tea partiers aren’t big fans of the Wall Street gamblers who expect to be bailed out when their bets go bad.

At the same time, Obama should use the bully pulpit to plug state and local initiatives that could build momentum for national action. Like the minimum wage fights rippling across the country, local and regional drives for fair tax reform make tremendous sense at a time of Washington gridlock.

When I sit down to watch the State of the Union, I’ll be looking forward to strong words about lifting up the poor. Let’s hope Obama doesn’t overlook the equally serious injustice of the overprivileged.

Sarah Anderson directs the Global Economy Project at the Institute for Policy Studies and is the author of the report Fast Food CEOs Rake in Taxpayer-Funded Pay. IPS-dc.org
Distributed via OtherWords (OtherWords.org)